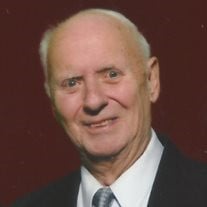 Chicopee- William Wisniowski, 73, a Chicopee resident, passed away Thursday, April 7, 2016 at Baystate Medical Center. He was born July 7, 1942 in Springfield, to the late Joseph Wisniowski and Elsie (Komoorian) Wisniowsi Pieczarka. Bill had attended Chicopee High School and graduated class of �61�. He joined the National Guard and had worked for 30 years as a Tool Maker for Rexnord in Springfield. Bill later went on to work at Stenor Tool and Covidien in Chicopee. He was a member of the Knights of Columbus #15125, and a member of the former Assumption Drum Core in Chicopee. Bill is survived by his loving wife of 46 years, Barbara (Piechowski) Wisniowski, his daughters; Amy Hebert and her husband Tom of Chicopee, Kathy Rocha and her husband George of Attleboro, his grandchildren; Mia Rocha and Preston Hebert. Life celebration hours will be held at Brunelle Funeral Home, 811 Chicopee St., Chicopee, MA 01013 on Tuesday, April 12, 2016 from 4-7PM. His funeral service will begin on Wednesday, April 13, 2016 at 9:30AM from Brunelle�s and will be followed by a Liturgy of Christian Burial at 11AM in St. Anthony of Padua Church, 56 Anthony St., Chicopee. The Rite of Committal and Burial will be in St. Stanislaus Cemetery, Chicopee. Donations in William�s name may be made to: Brigham and Women's Hospital, Development Office, 116 Huntington Ave., 3rd Floor, Boston, MA 02116. Please visit www.brunellefuneralhome.com for more details.

The family of William "Bill" Wisniowski created this Life Tributes page to make it easy to share your memories.

Send flowers to the Wisniowski family.