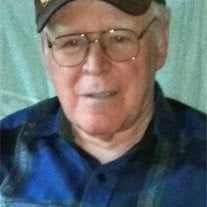 WILLIAM DONALD PLOUFFE 1931 - 2017 SHREWSBURY, VT- William �Don� Plouffe, 85, passed away on Saturday, June 24, 2017 at the Pines of Rutland. He was a Vermont resident for over thirty three years. He was a longtime Chicopee resident and was born in Holyoke and educated locally. Don was a veteran of the Korean War and served honorably in the United States Marine Corps. He was a self- employed custom upholsterer locally and owned and operated Don�s Custom Upholstery in VT for many years where he made many friends and lifelong customers. Don loved deer hunting, fishing and spending time at the beach, especially Old Orchard with his family. He leaves behind his wife of over 64 years, Vivian (Houle) Plouffe of VT; his six children, Steven Plouffe of Grand Isle, VT; Catherine Plouffe of Ware; Corrine Vanbibber of Sanford, GA; Jeannine Hughes of Greenfield; Danielle Plouffe of Northampton; Pamela Golemo of Southbridge, MA and his adored 11 grandchildren and 10 great grandchildren. He also leaves a brother, William Plouffe of Ogdensburg, NY and several nieces, nephews, cousins and dear friends. Don was predeceased by: his parents, Arthur and Rose (Tetreault) Plouffe; his siblings, Connie Paquette; Helen Hebert and Robert Plouffe. He also joins his beloved son Donald D. Plouffe who died May 17, 2001. Visiting hours will be held on Friday, June 30, 2017 from 4-7PM at Brunelle Funeral Home, 811 Chicopee St., Chicopee, MA 01013. His funeral will begin on Saturday, July 1, 2017 at 8:30AM from Brunelles and be followed by a Liturgy of Christian Burial at 10AM in St. Rose de Lima Church, 600 Grattan St., Chicopee. The Rite of Committal and Burial with military honors will be in Notre Dame Cemetery, South Hadley. Memorial donations in Don�s name can be made to The Alzheimer�s Disease Assoc., 264 Cottage St., Springfield, MA 01104. Please visit www.brunellefuneralhome.com for more details. $(document).ready(function(){ var ifr = $("#03p00354153x95e0"); ifr.data("ratio", ifr.attr("height")/ifr.attr("width") ); ifr.removeAttr("width").removeAttr("height"); // Resize the iframes when the window is resized $(window).resize(function(){ var width = ifr.parent().width(); ifr.width(width).height(width * ifr.data("ratio")); }).resize(); });

The family of William Donald Plouffe created this Life Tributes page to make it easy to share your memories.

Send flowers to the Plouffe family.