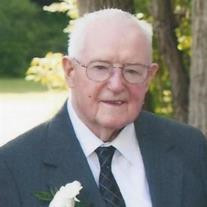 CHICOPEE- William F. Leahy, Sr, 91, entered into eternal rest and peace on Easter, April 5, 2015. He was born in Holyoke on December 21, 1923 a son of the late William James and Alice (Maroney) Leahy and educated locally. William was a proud US Navy veteran of WWII having served as an AMM/2C from 1941-1945. He was a longtime machine operator for the former James River Graphics/Scott Graphics and completed over 40 years of dedicated service with the companies. William was an avid dancer and loved stepping on the floor with his beloved wife May (Nichols) Leahy until her passing in 1994. He was also predeceased by a daughter, Muriel Hunter in 2014 and by his brothers, Frank and James Leahy as well as his sisters, Grace O�Connor and Alice Leahy. William kept his love of dancing alive up until his last few months and was always willing to lead. He is survived by his son, William F Leahy, Jr and his wife Louise of Chicopee; two daughters, Laura Scribner of South Hadley; Donna Suprenant and her husband Paul of Chicopee; his precious grandchildren including: 12 grandchildren, 23 great grandchildren and 11 great great grandchildren. He will be missed by his nieces, nephews and cousins as well as his extended family. Visiting hours for William will be held on Thursday, April 9, 2015 from 4-7PM at Brunelle Funeral Home, 811 Chicopee St., Chicopee, MA 01013. His funeral will begin on Friday, April 10, 2015 at 8:30Am from the funeral home and be followed by a Liturgy of Christian Burial at 9:30AM in St. Rose de Lima Church, 600 Grattan St. Chicopee. The Rite of Committal and Burial will be in St. Rose de Lima Cemetery. If friends desire memorial donations in William�s name can be made to Alzheimers Disease Assoc., 264 Cottage St., Spfld, MA 01104. Please visit www.brunellefuneralhome.com for more details. You are using an outdated web browser that does not support this video. Your browser does not support this video format. You should be able to view it in Chrome, Safari or Internet Explorer. $(document).ready(function(){ if ( false === supports_h264_baseline_video() ) { $("#vdfmtnt").show(); $("#vidplyr1").hide(); } });

CHICOPEE- William F. Leahy, Sr, 91, entered into eternal rest and peace on Easter, April 5, 2015. He was born in Holyoke on December 21, 1923 a son of the late William James and Alice (Maroney) Leahy and educated locally. William was a proud... View Obituary & Service Information

The family of William F. Leahy created this Life Tributes page to make it easy to share your memories.

Send flowers to the Leahy family.