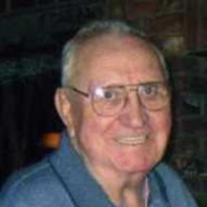 William A. Brown 1930 � 2010 CHICOPEE � William A. Brown, 80, died Friday, September 24, 2010 at his home, surrounded by his loving family. He was born in Chicopee on March 17, 1930 to the late George J. Sr. and Elizabeth (Veighey) Brown. William attended schools in Chicopee and graduated from Chicopee High School. Mr. Brown served our country in the United States Army during the Korean War where he earned the Army Occupation Medal. Upon discharge from the military, Mr. Brown made his home in Chicopee and worked for B. F. Perkins, where he retired after forty-eight years of service. He was a lifelong parishioner of the Grace Episcopal Church in Chicopee where he was Superintendant of their Sunday School for many years. Mr. Brown was a thirty second degree Scottish Right Mason and Past Master of the Chicopee Lodge. He was a member of the Melha Shrine Center in Springfield. Bill was also a member of the American Legion Post 353 in Aldenville and the Willimansett Heights Improvement League. Bill was an avid outdoorsman and truly enjoyed hunting and fishing. William leaves to cherish his memory, his wife of fifty-two years, Mildred L. (Rosendale) of Chicopee; his two daughters, Elizabeth A. Zelisko and her husband Thomas of Davenport, FL and Deborah B. Lapointe and her husband Roger of Feeding Hills; his sister, Anne Spinks of Chicopee; his three grandchildren, Jenna Hollon and her husband Wes of Davenport, FL, Jessica Lapointe of Feeding Hills and Adam Zelisko and his companion Julie Parisien of Feeding Hills and his great granddaughter, Londyn O. Hollon. He will also be sadly missed by several nieces, nephews and his nurse Laurie Anti. Beside his parents, Bill was also predeceased by his brother George J. Brown, Jr. Calling hours will be on Wednesday, September 29, 2010 from 5:00 p.m. to 7:00 p.m. at the Brunelle Funeral Home, 811 Chicopee St., Chicopee. There will be a Masonic Evergreen Service at 6:45 p.m. and a Service of Remembrance at 7:00 p.m. in the funeral home. Burial will be on Thursday, September 30 at 10:00 a.m. in Fairview Cemetery. Family and friends are asked to meet at the cemetery. Memorial contributions may be made in Bill�s memory, to Baystate VNA and Hospice, 50 Maple St., P.O. Box 9058, Springfield, MA, 01102-9058. $(document).ready(function(){ flowplayer("vidplyr1", "/tools/flowplayer/flowplayer-3.1.2.swf", { clip: { autoPlay: false, onStart: function(clip) { stopBGMusic(); } } }); });

The family of William A. Brown created this Life Tributes page to make it easy to share your memories.

Send flowers to the Brown family.