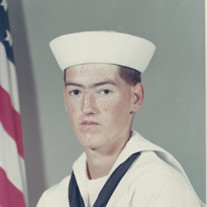 WAYNE L. RACINE 1950 -2017 CHICOPEE- Wayne L. Racine, 66, went home to be with the lord on May 12, 2017.Wayne was born on May 25, 1950 to Roger P. and Gertrude (Fournier) Racine. Wayne worked as a mechanic for the former Holyoke Street Railway before joining the U.S. Navy in 1968. He proudly served his country during the Vietnam War aboard the U.S.S Wright. After leaving the Navy he became a fireman on Westover Air Base and then ran the purchasing department. Most recently, he worked at MassMutual as a security guard, where he made many friends with the employees that went through his gate with his drawings of cartoon characters each day. Some of his drawings can be found in the cubicles at MassMutual and in different states and countries. He and his great niece, Ari Rinaldi drew numerous characters that they donated along with crayons to the Children�s� Department at Baystate Medical Center. He loved all animals especially his cats Q and Emmy and his beloved dog, Mia. Wayne was predeceased by his wife Darlene (Gosselin) Racine in 2004. He is survived by his brother, Gerald D. Racine of FL; his sister, Faith Nash of Chicopee; his sister and guardian angel, Pamela Racine of Chicopee. He also leaves his nieces and nephews: Michele Nash and her husband David Rinaldi; Matthew Nash and his wife JanLee; Gregory Nash and his wife Heather; Ryan Racine and Kerry Racine. He also leaves his great niece and art partner Arielle Rinaldi; his great nephew, Brandon Nash as well as a foster sister, Lois Batchelor and a dear friend Darlene Sass. Wayne�s family would like to thank Katie and the staff at the Baystate VNA and Hospice for their compassionate care during his extended illness. Visiting hours will be held on Friday morning, May 19, 2017 from 10:30-11:45AM at Brunelle Funeral Home, 811 Chicopee St., and be followed by a Liturgy of Christian Burial at 12:30PM in Holy Name of Jesus Church, 104 Springfield St., Chicopee. The Rite of Committal and Burial with military honors will be held at 2PM in the chapel of the Massachusetts Veterans� Memorial Cemetery, 1390 Main St., Agawam. In lieu of flowers, memorial donations in Wayne�s name can be made to Dakin Humane Society, 171 Union St., Spfld, MA 01105. Please visit www.brunellefuneralhome.com for more details.

The family of Wayne Lawrence Racine created this Life Tributes page to make it easy to share your memories.

Send flowers to the Racine family.