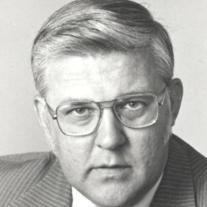 Walter F. Mrozinski 1934 - 2010 Chicopee - Walter F. Mrozinski, 76, formerly of Chicopee, passed away on Sunday, June 27, 2010, at the Heritage Hall Rehabilitation Center in Agawam surrounded by his loving family. Born May 10,1934, in Chicopee, he was the son of the late Walter L. and Helen (Tokarski) Mrozinski. He was educated in Chicopee and graduated in 1952 from Chicopee High School. After graduation, Walter continued his education at Western New England College where he majored in Mechanical Engineering. He was drafted in 1956, and served on active duty with the United States Army in Germany. He received an Honorable discharge in 1963. He was employed by Chicopee Manufacturing Co., a Division of Johnson & Johnson, as a mechanical engineer in Chicopee for 15 years before purchasing the manufacturing company in 1975, and subsequently saving several hundred jobs within the City of Chicopee. Facemate Corporation survived under the management and direction of Walter for over 27 years. As a Business Owner, Walter supported many organizations within the City of Chicopee. He was a Past President of the Chicopee Chamber of Commerce, and past member of the Board of Directors, Chicopee Chamber Of Commerce � Fireball Club Treasurer, Major Contributor and Organizer of the World Kielbasa Festival, Westover AF Galaxy Council, Boy Scout Troop 138, Active Member of the Lodge of Elks and Knight of Columbus. He had many accomplishments and received many honors over the years but was touched and honored when given the Shining Star- Citizen of the Year Award in Chicopee. Above all, he was proudest of his children, grandchildren, nieces and nephews and his true friends. He was predeceased by his wife of 46 years, Joan M. (DuPont) Mrozinski, who passed away in July of 2005. He is survived by his three children, JoAnn Mrozinski of Chicopee, Carol Mrozinski Roy and her partner, Margaret Jones, of Northampton, and Edward Mrozinski and his wife, Mary Louise of Chicopee. He also leaves behind 5 grandchildren whom he loved and cherished and many relatives, nieces, nephews and longtime friends. Funeral services will be held on Saturday, July 3, at 8:15am from the Brunelle Funeral Home, 811 Chicopee St., Chicopee, MA, followed by a Liturgy of Christian Burial at 9:30 am at St. Rose de Lima Church, Grattan St., Chicopee, MA. Burial will be in the St. Rose de Lima Cemetery. Calling Hours will be held on Friday, July 2, from 4 to 8 pm.

The family of Walter F. Mrozinski created this Life Tributes page to make it easy to share your memories.

Send flowers to the Mrozinski family.