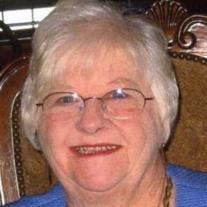 CHICOPEE � Veronica A. (Rusinowski) Cruz, 82, died Friday, May 13, 2011 at Baystate Medical Center. She was born in Chicopee on September 1, 1928 to the late Stanley and Nellie (Sawa) Rusinowski. Veronica was a lifelong resident of Chicopee and worked as a Bank Teller at the former American Bosch Credit Union where she retired after twenty five years of service. She was an active member of the Chicopee Senior Center where she enjoyed playing cards and bingo. Veronica enjoyed the natural beauty of her rose garden and found peace and solace in watching the birds in her backyard. Veronica�s pride and joy in her life, was her family.�She leaves on this earth to cherish her memory, her loving husband of sixty-three years, Americo M. �Nick� Cruz of Chicopee; her daughter, Arleen M. Morley and her husband, Roy of Amarillo, TX; her sister, Jennie Maria of Reading, MA; her two grandchildren, Amy Eaton and her husband Chris and Jaime Tirado and her husband Isai all of Amarillo, TX; her four great grandchildren, Addison, Jeremy, Adrian and Khloe and her little feline �pumpkin� Nicky whom she grew to love very much. In addition to her parents, Veronica was also predeceased by her son, Michael J. Cruz in 2007; her three brothers, Frank, John and Richie and her three sisters, Stella, Mary and Sally. There will be a Service of Remembrance on Thursday, May 19 at 12:30 p.m. at the Brunelle Funeral Home, 811 Chicopee St. Chicopee. Burial will follow the Service in the Chapel at the Massachusetts Veterans� Memorial Cemetery in Agawam. A gathering will take place prior to the Service from 11:30 a.m. to 12:30 p.m. at the funeral home. Please visit www.brunellefuneralhome.com for directions or to share a memory with Veronica�s family.

CHICOPEE &#65533; Veronica A. (Rusinowski) Cruz, 82, died Friday, May 13, 2011 at Baystate Medical Center. She was born in Chicopee on September 1, 1928 to the late Stanley and Nellie (Sawa) Rusinowski. Veronica was a lifelong resident of Chicopee... View Obituary & Service Information

The family of Veronica A. Cruz created this Life Tributes page to make it easy to share your memories.

Send flowers to the Cruz family.