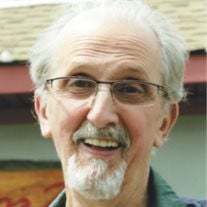 Springfield- Ulric �Ric� Cote, 78, passed away peacefully July 28, 2016 with his family by his side. He was born on November 4, 1937 a son of the late Ulric J. and Florence (Duval) Cote and educated in Springfield Schools. He proudly served in the U.S. Navy during the Korean War. Ric worked as a barber for several years at Lords and Ladies in the Baystate West Building, Springfield. During his time there he made friends and met his wife Joyce (Brown) Cote of 36 years. Ric also worked for Facemate in Chicopee and Sunshine Village. During retirement he had many part time jobs which kept him busy but especially enjoyed being a driver�s education instructor for university driving school and a limo driver. Ric enjoyed fishing, sports, antique cars, telling jokes, being a Yankees fan but most of all he loved spending time with his grandchildren. In addition to his loving wife, he leaves two daughters, Elisha Burr and her husband David of Gilbert, AZ and Dawn Cote of Springfield, MA. He will be deeply missed by his six grandchildren, Jacob and Tyler Burr; Maia Cote, Alexandria Cote, Haley Cote, and Cassandra Cote. He also leaves a sister Evelyn Richards of Springfield; Sister In-law Sharon Crochiere of Chicopee; Brother In-law David Brown and his wife Gail of Baldwinville, MA. Ric now joins his in-laws Arlene and Melvin Brown in heaven. Visiting hours will be held on Tuesday, August 2, 2016 from 9AM �10:30AM at Brunelle Funeral Home, 811 Chicopee St., Chicopee, MA 01013 followed by a Liturgy of Christian Burial at 11:15AM in St. Anthony of Padua Church, 56 St Anthony St., Chicopee, MA. The Rite of Committal and Burial with military honors will follow in the chapel of the Massachusetts Veterans� Memorial Cemetery, 1390 Main St., Agawam at 1PM. Please visit www.brunellefuneralhome.com for more details.

The family of Ulric Ric Cote created this Life Tributes page to make it easy to share your memories.

Send flowers to the Cote family.