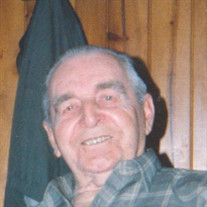 THEODORE F. LAKOTA 1916 � 2008 CHICOPEE � Theodore F. Lakota, 92, died peacefully at home on Tuesday, June 10. He was born in Granby, MA on May 4, 1916, the son of the late Frank and Mary (Mazurek) Lakota, and attended local schools there. Ted retired from Savage Arms as a tool maker after thirty four years of service. He loved to work with his hands and had enjoyed carpentry as a hobby. He was most happy camping with his late wife, of over fifty years, Rita (Beauregard) Lakota, who died in 1995. Ted is survived by his son, Robert Lakota and his wife Jaqueline, his daughter, Mary Jane Lakota, and an extended family member who was like a second daughter to Ted, Deborah Lyons, all of Chicopee. He also leaves his sister, Adele Wierciszewski of Chicopee. He will be sadly missed by six grandchildren, six great grandchildren, one great-great grandchild, and several nieces and nephews. He was predeceased by two sons, Raymond Lakota, and Francis Lakota. Relatives and friends are invited to gather on Tuesday, July 1st for a 12 noon Liturgy of Christian Burial at St. Patrick�s Church, 319 Broadway, in Chicopee, followed by burial in the parish cemetery. There are no calling hours. The Brunelle Funeral Home has been entrusted with the arrangements. In lieu of flowers, contributions in Ted�s memory may be directed to Spectrum Hospice, 770 Converse St., Longmeadow, MA 01106.

The family of Theodore F Lakota created this Life Tributes page to make it easy to share your memories.

Send flowers to the Lakota family.