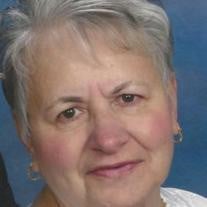 CHICOPEE- Shirley S. �Nana� Twining, 76, passed away on Sunday January 13, 2013 at Baystate Medical Center after a brief illness. Shirley was primarily a homemaker and spent most of her time with her family and most recently with her grandchildren. She worked for several years at the Bellamy School as a noontime aide and prior to that at Permalin Fibre in Holyoke. Shirley was born in Slatington, PA on July 23, 1936 a daughter of the late Nathan and Ruth (Koons) Hawk and was a 1955 graduate of Jim Thorpe High School in Pennsylvania. Shirley was active at St. Christopher�s Episcopal Church in Chicopee with her devoted husband of 54 years William B. Twining. She was a generous woman with great hospitality and her caring ways will be remembered by all who knew her. In addition to her husband, Shirley is survived by her son, Blake Twining of Chicopee; her daughter, Kim Aponte and her husband Jay of Holyoke; five sisters, Effie Conrad of PA; Mildred �Pat� Reabold of PA; Ann Louise Shink of PA; Carol Yuhas of PA; Valentine Conrad of PA and five cherished grandchildren, Kristin Vasquez, Kelcie Twining, Joseph Vazquez, Chandler Twining, Madison Twining. Shirley will be missed by her many nieces, nephews, cousins and extended family and friends. Visiting hours will be held on Friday, January 18, 2013 from 4-7 PM at Brunelle Funeral Home, 811 Chicopee St., Chicopee, MA 01013. Her funeral will begin on Saturday, January 19, 2013 at 9:45AM from the funeral home and be followed by a funeral service at 11AM in St. Christopher�s Episcopal Church, 27 Streiber Dr., Chicopee, MA 01020. The inurnment will be private at the Massachusetts Veterans� Memorial Cemetery, Agawam. As Shirley was a �survivor�, if friends desire memorial donations in her name can be made to the American Cancer Society, 30 Speen St., Framingham, MA 01701.

CHICOPEE- Shirley S. &#65533;Nana&#65533; Twining, 76, passed away on Sunday January 13, 2013 at Baystate Medical Center after a brief illness. Shirley was primarily a homemaker and spent most of her time with her family and most recently with... View Obituary & Service Information

The family of Shirley Twining created this Life Tributes page to make it easy to share your memories.

Send flowers to the Twining family.