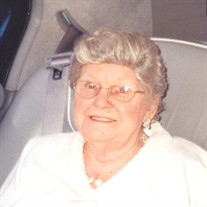 ROSA THEROUX-BERGERON 1909 � 2008 CHICOPEE� The Lord brought Rosa (Ledoux) Theroux-Bergeron home on May 18, 2008, two days before her ninety ninth birthday, surrounded by her very devoted family. She was born in St. Pie de Guire, Canada on May 20, 1909, the beloved daughter of the late Joseph and Melina (Thibault) Ledoux. She came to Holyoke at age thirteen and was later employed there for many years in the textile mills. She later moved with her family to the Willimansett section of Chicopee where she was an eighty three year resident. Rosa was a communicant of the Church of the Nativity of the Blessed Virgin Mary in Willimansett and a member of the St. Anne�s Sodality. She was also a member of Le Cercle des Grand Mamans, the Franco American Women�s Club, and the Golden Age Club. She was an avid card player and enjoyed playing every day. She was predeceased by her first husband, Oscar Theroux in 1975 and her second husband, Edward Bergeron in 1995. She leaves her loving children, Real (Ray) Theroux and his wife Donna of Ludlow, and her daughters, Lorraine Archambault and her husband Roland, and Priscille Duval and her husband Richard, all of Chicopee. Rosa is also survived by six grandchildren; Dr. Gary Archambault and his wife Joan, Jocelyn Derosiers and her companion John, Timothy Theroux and his wife Laura, Kristin Ingram and her husband Jeffrey, Lori Rousseau and her husband Garry, and Sandra Duprat and her husband Roger, two step grandsons, Thomas Burger and his wife Jennifer, and Todd Burger. She also leaves six great grandchildren, many nieces and nephews, her Godchild, Jeannine Banville, and extended family members in Connecticut, Florida, and Arizona. She was predeceased by four sisters and three brothers, and step grandson, Timothy Burger, who predeceased her in 2000. Rosa�s family wishes to express their sincere thanks and gratitude to the staff at the Willimansett Center West for their care and compassion and special thanks to Eugene Banville for his constant visits. The funeral procession will form on Saturday, May 24 at 9am at the Brunelle Funeral Home, 811 Chicopee St.,�followed by a Liturgy of Christian Burial at 10am at Nativity of the Blessed Virgin Mary Church, both in the Willimansett section of Chicopee. Burial will be in St. Rose de Lima Cemetery. Calling hours at the funeral home are Friday, May 23 from 4-8pm. In lieu of flowers, memorial donations may be made in her memory to the Church of the Nativity of the Blessed Virgin Mary, 780 Chicopee St., Chicopee, MA 01013. Please visit www.brunellefh.com.for online guest book.

The family of Rosa Theroux-Bergeron created this Life Tributes page to make it easy to share your memories.

Send flowers to the Theroux-Bergeron family.