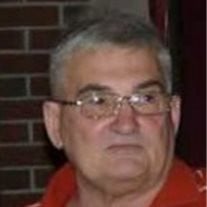 CHICOPEE- Ret. MSgt Ronald J Orzechowski, 71, passed away on his birthday, September 6, 2016 at his home. He was a proud member of the U.S. Air Force and served honorably during Vietnam. Ron enlisted in the Air Force Reserve and served with the 58th Aerial Port Squadron at Westover Air Reserve Base as an air cargo specialist retiring as a MSgt with over 20 years of service. He owned R&R Tax in West Springfield for many years and later sold the business to his partner who still operates the company today. He was born in Holyoke and was educated in area schools graduating from Granby High School. He later attended UMASS where he received his MBA in accounting. Ron loved hunting, fishing and spending time with family, especially his nieces and nephew. Ron was blessed to have spent many holidays and weekly meals with his brother and sister in law. He volunteered for many years at the Granby Senior Center where he would deliver meals to the community. He was also a member of the AMVETS Post #12 /Chicopee, K of C Unity Council #2212/West Springfield, and a member of the American Legion Post #452/Chicopee. Ron was a dedicated veteran, brother, uncle, and godfather who will be deeply missed by his loving family. He leaves his sister, Joan Blanchard and her husband Gene of TX; two brothers, Leo Orzechowski and his wife Niewie of Dunstable, MA and John Orzechowski and his wife Mary of Holyoke. He also leaves several nieces, nephews, cousins and godchildren. Life Celebration hours will be held on Monday, September 12, 2016 from 4-7PM at Brunelle Funeral Home, 811 Chicopee St., Chicopee, MA 01013. A funeral home service will be held on Tuesday, September 13, 2016 at 9:15AM at Brunelle�s and will be followed by the burial with military honor in the Massachusetts Veterans� Memorial Cemetery, 1390 Main St., Agawam, MA 01001 at 11AM. In lieu of flowers, memorial donations in Ronald�s name can be made to the AMVETS Post #12 Scholarship Fund, 754 Montgomery St., Chicopee, MA 01013 or to the Granby COA/Senior Center, 10 West State St., Granby, MA 01033. Please visit www.brunellefuneralhome.com for more details.

CHICOPEE- Ret. MSgt Ronald J Orzechowski, 71, passed away on his birthday, September 6, 2016 at his home. He was a proud member of the U.S. Air Force and served honorably during Vietnam. Ron enlisted in the Air Force Reserve and served with... View Obituary & Service Information

The family of Ronald J Orzechowski created this Life Tributes page to make it easy to share your memories.

Send flowers to the Orzechowski family.