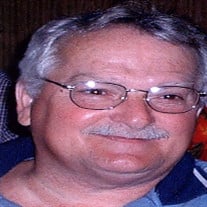 Ronald H. Carter 1947 � 2008 PORT ORANGE, FL � Ronald H. �Pudgy� Carter, 60, of Port Orange, FL, passed away on September 21, 2008 peacefully, at home with his loving family by his side. He was born on October 13, 1947 in Holyoke and grew up in Chicopee. He resided with his family in Feeding Hills and later retiring with his wife, to Port Orange, FL in 2004. He is survived by his wife of forty years, Judith (Boberek) Carter; he also leaves his children Vanessa Carter and son-in-law Bill Economos of South Daytona, FL, Holly Post and her husband Tom of Port Orange, FL and Cara Carter and son-in-law Joey Fitzgerald of Indian Orchard; his mother Claire Carter of South Hadley; his brothers Bobby, David and Dennis Carter all of Chicopee; his sisters Gail Ritchie of Daytona, FL and Pam Kranz of South Hadley; his loving grandchildren, Derreck, Marcus, Ethan, Elliot, Anthony, Giovanna and Amy. He also leaves behind many aunts, uncles, cousins, nieces and nephews. He was predeceased by his father Robert L. Carter. Ronald attended Chicopee High School. He served our country in the United States Army 35th Infantry Division as a Sergeant, in Vietnam. He was employed by the U.S. Postal Service for thirty � three years and retired in 2003. He was actively involved with various Vietnam Veteran issues. He was a dedicated volunteer at Intergroup Alcoholic Anonymous in Daytona Beach, FL. Pudgy enjoyed crossword puzzles and card games � especially solitaire and poker. He loved going to the beach and the casinos with family and friends. He was an avid New England sports fan. A celebration of Ron�s life will be held at the Brunelle Funeral Home, 811 Chicopee St, Chicopee, on Wednesday, October 1, 2008 from 5:00 � 8:00 p.m. with a Service of Remembrance at 7:30 p.m. Burial will be private and at the convenience of the family. In lieu of flowers, memorial contributions may be made in Ronald�s memory, to either the Hospice of Volusia/Flagler, 3800 Woodbriar Trail, Port Orange, FL 32129 or to Alcoholics Anonymous, 345 Beville Rd, South Daytona, FL 32119.

The family of Ronald H. Carter created this Life Tributes page to make it easy to share your memories.

Send flowers to the Carter family.