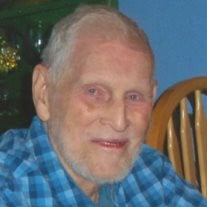 Rolland J. Paulin1930 � 2016Chicopee- Rolland Joseph Paulin, 86, passed away on February 15, 2016 in Baystate Medical Center in Springfield. Rolland was born on February 4, 1930 in Montague, the son of the late Lucien H. and Alice (Perinet) Paulin. He was a 1948 graduate of Turners Falls High School. Rolland served his country in the United States Army, in the Military Police, during the Korean Conflict. He received an honorable discharge, attaining the rank of Corporal. Prior to his retirement, he was employed for 42 years by Hano Business Forms, Springfield. Rolland was a parishioner of the former Nativity BVM Church and attended St. Anthony of Padua Church, Chicopee. Rolland was a member of the Chicopee Sportsmen�s Club, a life member of the N.R.A., and also a blood donor. He enjoyed hunting, fishing, and canoeing. He is survived by his 3 sons, James Paulin of Agawam, Richard Paulin of West Springfield, Kenneth Paulin of Florida; 2 daughters, Lorrene Paulin and Jennifer Paulin of Chicopee; 4 grandchildren, Caitlin Paulin, Michael Paulin, Kevin Paulin all of Agawam, Amanda Gevry of Chicopee; one great grandchild, Conner Turkowski of Chicopee; and his former wife, Helen (Corrigan) Paulin of Chicopee. The family will gather and receive friends on Friday (Feb. 19, 2016) beginning at 8:30 AM in the Arthur J. Brunelle Funeral Home, 811 Chicopee St., Chicopee. Funeral services will begin at 10:15AM from the funeral home, followed by an 11:00 AM Liturgy of Christian Burial, offered in St. Anthony of Padua Church, 56 Anthony St., Chicopee. Burial with military honors will follow in St. Rose de Lima Cemetery, Chicopee. Donations may be made to the Holyoke Soldier�s Home Recreation Fund 110 Cherry St., Holyoke, MA. Please visit www.brunellefuneralhome.com for more details.

The family of Rolland Paulin created this Life Tributes page to make it easy to share your memories.

Send flowers to the Paulin family.