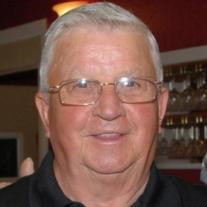 ROLAND M. LEFEBVRE1930 � 2013CHICOPEE- Roland M. Lefebvre, 83, a longtime Chicopee resident passed away suddenly on Monday January 14, 2013 at his home. Roland was born on January 7, 1930 in St. Elie, Orford, PDQ, Canada, a son of the late Antonio and Cecile (Faucher) Lefebvre and educated in Canada. His family settled in Holyoke and Roland worked in the area paper mills as a young man. He enlisted in the U.S. Army during the Korean War and served honorably until 1953. Most recently Roland worked as a set-up man and team leader for Acme Chain now U.S. Tsubaki and retired in 1995 after completing over 20 years of dedicated service. Roland was predeceased by his beloved wife Jean (Chateaneuf) in 1997 and by a brother, Paul Andre Lefebvre in 1977. Roland was a longtime communicant of Immaculate Conception Church, was a member of the American Legion Post # 337 and enjoyed golf and watching his granddaughters play basketball. He is the proud father of three daughters, Susan Haberman and her husband Howard of Easthampton, Cindy Fiorillo and her husband Steven of Dana Point, CA and Linda Robins of Chicopee. Roland also leaves his two brothers and two sisters, John Paul Lefebvre of Chicopee; Guy Lefebvre of South Hadley; Paulette Dame of Houston, TX ; Huguette McLauglin of Stamford, CT and his sister in law Eleanor (Chateaneuf) Brown of Panama City Beach, FL. He will be remembered fondly by his five grandchildren, Christina Bordeau of Springfield; Eric Haberman of Easthampton; Lynn Haberman of Chicopee; Lindsey Robins and Kyra Robins both of Chicopee; and by his three great- grandchildren, Trent Bordeau, Paige Bordeau and Gabrielle Haberman. Roland also leaves several nieces, nephews, extended family members and good friends. Visiting hours will be held on Saturday January 19, 2013 from 8:30 � 10:30 AM at Messier Funeral Home, 1944 Northampton St., Holyoke, MA 01040 and be followed by a Liturgy of Christian Burial at 11AM in Immaculate Conception Church, 54 No. Summer St., Holyoke. The Burial and Rite of Committal will be in Notre Dame Cemetery, South Hadley. If friends desire, memorial donations in Roland�s name may be made to the USO, 100 Walker Ave., Box 33, Westover ARB, Chicopee, MA 01022 or to the Shriners Hospital, 516 Carew St., Spfld, MA 01104. Please visit www.messierfuneralhome.com for more details.

The family of Roland Lefebvre created this Life Tributes page to make it easy to share your memories.

Send flowers to the Lefebvre family.