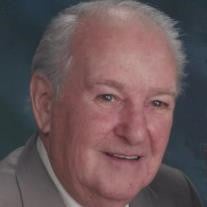 CHICOPEE- Roger L. Bernashe, 87, passed away on December 26, 2014 in Willimansett East Nursing Home. He was born on September 9, 1927 to the late Alfred and Mary (Guilmette) Bernashe in Chicopee. Roger grew up in Chicopee, attending Mount Carmel and Precious Blood schools. After high school, he proudly served in the United States Navy for two years. Roger married Theresa Robidoux on September 6, 1948 and they spent many loving years together until her passing on June 21, 2000. Roger was a proud member of the Chicopee community, and enjoyed being a business owner and representative of the city. He owned and operated the former 3rd Hampden Restaurant on Chicopee Street in the 1950s and 60s. Roger later owned a taxicab business, and then Bernashe Insurance and Real Estate from the same building. He served in the MA State House of Representatives from 1959-1971, then in the MA State Senate from 1971-1979, representing his beloved city of Chicopee. In 1980, Roger and his wife opened Bernie�s Dining Depot Restaurant, which became famous in just two years. Today, the family legacy continues at Bernie�s, with Roger�s son, Gary, owning the restaurant. He was a member of various clubs in Chicopee, including the Knights of Columbus, Lion�s Club, Beaver�s Club, the American Legion, and the Galaxy Council. During his leisure time, Roger enjoyed yachting on the Nantucket Sound and Cape Cod on the Terry B. with his friends. Roger is survived by his two sons, Gary Bernashe and his wife Barbara M. of Chicopee, and Daniel Bernashe and his wife Barbara J. of Granby, MA; a daughter, Diane Bernashe-Lecca and her husband James of Naples, FL; nine grandchildren, Brian, Michelle, Philip and his wife Erin, Todd and his wife Melissa, Mathew and his wife Danielle, Douglas, Jonathan and his wife Nichole Bernashe, Christopher and Alexander Lecca; and two great-grandchildren, Casey and Cassidy Bernashe. He is also survived by a brother, Roland Bernashe and his wife Kathy; a sister, Dorothy Moreau and her husband George; and several nieces and nephews. Calling hours for Roger will be Sunday, January 4 from 1-4PM in the Brunelle Funeral Home, 811 Chicopee St in Chicopee. A Liturgy of Christian Burial will be held on Monday, January 5 at 10AM in St. Rose de Lima Church, 600 Grattan St, Chicopee, followed by burial in St. Rose de Lima Cemetery. A memorial mass will also be held by his daughter, Diane Bernashe-Lecca, at St. Anne�s Church, 475 9th Ave South, Naples, FL on Wednesday, January 14 at 8AM. In lieu of flowers, donations may be made to Lorraine�s Soup Kitchen, 170 Pendexter Ave, Chicopee, MA 01013.

CHICOPEE- Roger L. Bernashe, 87, passed away on December 26, 2014 in Willimansett East Nursing Home. He was born on September 9, 1927 to the late Alfred and Mary (Guilmette) Bernashe in Chicopee. Roger grew up in Chicopee, attending Mount Carmel... View Obituary & Service Information

The family of Roger L. Bernashe created this Life Tributes page to make it easy to share your memories.

Send flowers to the Bernashe family.