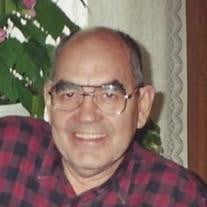 HOLYOKE- Robert Ernest Roy, 81, a longtime resident here and Eucharistic Minister at Blessed Sacrament and Immaculate Conception Church passed away on Saturday, December 1, 2012 at Wingate at South Hadley. Robert was a man of great faith and was a diligent representative of the Knights of Columbus in the 4th Degree for the Fairview Council # 4044. Robert was born in Holyoke on January 24, 1931 a son of the late Rodrigue and Freida (Martin) Roy. He was a longtime employee at EIS Wire & Cable in South Hadley retiring from maintenance after over 42 years of service. He was an avid fisherman, hunter and especially enjoyed his trips to Lake Champlain. Robert was predeceased by his beloved wife Georgette (Huard) Roy in January of 2003. He is survived by his six children, Debbie Roy of Hadley; Michael Roy of Chicopee; Aline Roy of Chicopee; Sue Papianou of Chicopee; Christine Wilkins of Wardsboro, VT; Paul Roy of South Hadley; five grandchildren, Angela Papianou, Caitlin Delaney, April Papianou, Madison Roy and Zackary Roy. He will also be missed by his dear friend, Pat Safranawicz of Holyoke and his nieces and nephews. Visiting hours will be held on Wednesday, December 5, 2012 from 4-7 PM at Brunelle Funeral Home, 811 Chicopee St., Chicopee, MA 01013. His funeral will begin on Thursday, December 6, 2012 at 8:45 AM from the funeral home followed by a Liturgy of Christian Burial at 10 AM in Immaculate Conception Church, 52 North Summer St., Holyoke, MA. The burial will be in Notre Dame Cemetery, South Hadley, MA. If friends desire, in lieu of flowers memorial donations can be made to the American Heart Assoc., 54C Wayside Ave, W. Spfld, MA 01089.

HOLYOKE- Robert Ernest Roy, 81, a longtime resident here and Eucharistic Minister at Blessed Sacrament and Immaculate Conception Church passed away on Saturday, December 1, 2012 at Wingate at South Hadley. Robert was a man of great faith and... View Obituary & Service Information

The family of Robert E. Roy created this Life Tributes page to make it easy to share your memories.

Send flowers to the E. family.