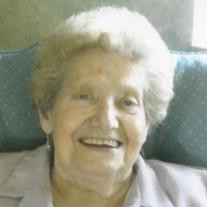 CHICOPEE-Rita V. (Trudell) Bourgeois Lacoste, 97, passed away on November 6, 2014 in Mount St. Vincent Nursing Home in Holyoke. She was born on July 19, 1917 in Holyoke to the late David and Anna (Durcharme) Trudell. Rita worked at Spaulding, retiring there after many years of dedicated work. She was a longtime member of the former Nativity Church in Chicopee and was a collector and member of Our Lady of the Nativity. She was also a member of the United Women of Chicopee. Rita was a loving person who had a big heart, loved being around people, and was often called �Smiley� by those who knew her. Rita was predeceased by her husband, Gaspard Lacoste in 1975; her son, Robert Bourgeois in 2011; and her longtime friend, Conrad Keiderling. She is survived by a son, Bruce Bourgeois of Chicopee; a daughter, Lorraine Sharer and her husband Bill of Lambertville, NJ; a daughter-in-law, Elaine Bourgeois; four grandchildren, Robin, Alan, Christine, and Shelley; and three great-grandchildren, Ashley, Benjamin, and Lucas. She is also survived by her longtime and dedicated friend, Sue Hastings. Calling hours will be from 1-3PM on Sunday, November 9 in the Brunelle Funeral Home, 811 Chicopee St, Chicopee. Services for Rita will be Monday, November 10, beginning at 8:30AM in the funeral home, followed by a Liturgy of Christian Burial at 9:30AM in St. Rose de Lima Church, 600 Grattan St, Chicopee. Burial will be in St. Rose de Lima Cemetery, Olsen St in Chicopee. Donations may be made in Rita's memory to Mercy Hospice, 2112 Riverdale St, Suite 3, West Springfield, MA 01089. For additional information, please visit www.brunellefuneralhome.com.

CHICOPEE-Rita V. (Trudell) Bourgeois Lacoste, 97, passed away on November 6, 2014 in Mount St. Vincent Nursing Home in Holyoke. She was born on July 19, 1917 in Holyoke to the late David and Anna (Durcharme) Trudell. Rita worked at Spaulding,... View Obituary & Service Information

The family of Rita Victoria Lacoste created this Life Tributes page to make it easy to share your memories.

Send flowers to the Lacoste family.