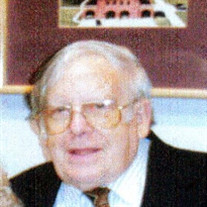 RICHARD E. RUFFNER 1926 � 2008 CHICOPEE � Mr. Richard E. Ruffner, 81, a forty two year Chicopee resident, passed away on Friday, November 21, 2008 in a local nursing home. He was born in Flora, Indiana on December 2, 1926, a son of the late Charles A. and Sarah E. (Reynolds) Ruffner. He attended schools in Indiana and proudly served his country in the U. S. Army, U.S. Navy, and retired after a twenty year career in the U.S. Air Force, having been stationed at Westover Air Force Base and returning to civilian life with his family in Chicopee in 1968. He also retired from the U. S. Postal Service after twenty years. He was a member of the DAV, an avid bowler, and loved sports, especially the Detroit Tigers, and NASCAR races. He is survived by his beloved wife of fifty six years, Naomi (Brown) Ruffner, his daughter, Vicki Connor and her husband Thomas of Chicopee, two sons, David and his wife Frances of Westfield, and Robert of Missouri. He also leaves one brother, Robert of Tennessee, and one sister, Pauline Landis of Texas. He will be sadly missed by three granddaughters, Amanda Walker, Gina Duplisea, and Lisa Snopek and four great grandchildren, Shannon and Adam Duplisea, Joey Snopek, and Dylan Walker and several nieces and nephews. He was predeceased by three brothers, James, Eston, and Louis, and four sisters, Dorothy Clawson, Edith Keyes, Minnie Hocksted, and Mary Randall. Funeral services are on Tuesday, November 25 at the Brunelle Funeral Home, 811 Chicopee St. with calling hours from 8:30 � 10:30am. A funeral home service will be held at 10:30am with Pastor Timothy Reed officiating. Burial with military honors will follow in Fairview Cemetery. In lieu of flowers memorial contributions may be directed to the Chicopee Senior Center Building Fund, 7 Valley View Court, Chicopee, MA 01020.

The family of Richard E. Ruffner created this Life Tributes page to make it easy to share your memories.

Send flowers to the Ruffner family.