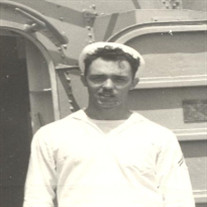 Richard D. Peloquin 1935 � 2009 Southampton � Richard D. "Dick" Peloquin, 73, a forty three year Southampton resident and former thirty year Willimansett resident, died on Wednesday, September 23, 2009 at the Holyoke Medical Center. He was born in Chicopee on November 25, 1935, a son of the late Delore and Pauline (Masse) Peloquin. He attended local schools and was a graduate of Chicopee High School and proudly served in the U.S. Navy during the Korean Conflict. He was previously employed as a machinist at Berkshire Industries and will be remembered as a hard worker who passed his skills, abilities, and work ethics on to his beloved family. He was known for his keen sense of humor and will be recalled as a �good egg�. Dick was a member of the former Retreads Motorcycle Club and also enjoyed many successful outings at the Foxwoods Casino. He was also a well known entrepreneur in Holyoke for rehabilitating rental properties. He is survived by his beloved wife of fifty years, Theresa (Delude) Peloquin, two sons, Robert and Richard T. and his wife Melissa, of Southampton, three daughters, Deborah Peloquin Szenftner, of Southampton, Donna Thouin and her husband Daniel of Westhampton, and Theresa York and her husband Wayne of Southampton. He also leaves his brother, Raymond Peloquin of Plant City, Florida and will be sadly missed by ten grandchildren, six great grandchildren, and several nieces and nephews. Calling hours are on Sunday, September 27 from 3 - 7pm only, at the Brunelle Funeral Home, 811 Chicopee St, in the Willimansett section of Chicopee. Private burial at the convenience of the family. In lieu of flowers, contributions in Dick�s memory may be directed to Soldier On, 421 North Main St., Building 6, Leeds, MA 01053. Their web site www.wesoldieron.org.

The family of Richard D. Peloquin created this Life Tributes page to make it easy to share your memories.

Send flowers to the Peloquin family.