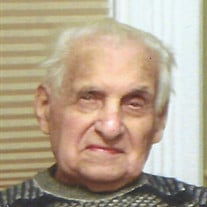 Richard F. Freitag, Sr. January 2, 1921 ��March 2, 2017 CHICOPEE- With great sadness, the family of Richard Frank Freitag, Sr. (�Pepere�), formally announces his passing on March 2, 2017. During his 96 years, he was the picture of respect, honor, and love. Raised on the family farm in Aldenville, Massachusetts, he was introduced to his love of gardening. He graduated from Chicopee High School in auto repair and worked at Haarmann Steel in Chicopee, Massachusetts for over 40 years. Gardening was his passion, and he generously fed many people with his bountiful annual harvest. He was an avid sports fan and tried not to miss a Red Sox or Patriots game. He told great stories, but also knew how to listen to others. A tough exterior protected a kind, genuine man of complete integrity. His brother, Edmond Freitag, sister, Charlotte M. Freitag, and companion, Rhea Richards (�Trixie�) predeceased Richard. He is survived by his sister, Mary M. Robidoux-Hooben and her husband, John, and his sons: Robert, Donald and his wife Marie, and Richard Jr. He was a loving Pepere to eight grandchildren and many great-grandchildren. Visiting hours will be held on Monday, March 6, 2017 from 5-7PM at Brunelle Funeral Home, Chicopee. His funeral will begin on Tuesday, March 7, 2017 at 9:30AM from Brunelle�s and be followed by The Rite of Committal and Burial in St. Stanislaus Cemetery, 800 Montgomery St., Chicopee. In lieu of flowers memorial donations can be made to Lorraine�s Soup Kitchen, 170 Pendexter Ave., Chicopee, MA 01013 or to the Shriners Hospital for Children, 516Carew Street, Spfld, MA 01104. Please visit www.brunellefuneralhome.com for more details. $(document).ready(function(){ var ifr = $("#01p50344859x85e0"); ifr.data("ratio", ifr.attr("height")/ifr.attr("width") ); ifr.removeAttr("width").removeAttr("height"); // Resize the iframes when the window is resized $(window).resize(function(){ var width = ifr.parent().width(); ifr.width(width).height(width * ifr.data("ratio")); }).resize(); });

The family of Richard F Freitag created this Life Tributes page to make it easy to share your memories.

Send flowers to the Freitag family.