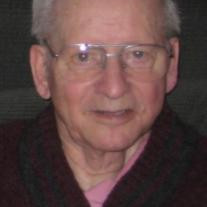 Raymond A. Provost 1925 � 2010 SOUTH HADLEY � Raymond A. Provost, 84, died Tuesday, April 20, 2010 at Wingate at South Hadley. He was born in Holyoke on October 5, 1925 to the late Raoul and Hortense (Niquette) Provost. He attended schools in Chicopee and was a parishioner of Assumption Church and the former Nativity of the Blessed Virgin Mary Church where he was a member of the League of the Sacred Heart. Mr. Provost served our country in the United States Army during WWII. While in the military, Ray earned the Army of Occupation Medal (Germany), the Good Conduct Medal and the European African Middle Eastern Theater Campaign Ribbon. After his discharge from the military, Ray made his home in Chicopee and worked for Hano Business Forms for forty years. Mr. Provost was a member of the Boy Scouts Troop 424 for fifteen years and was a member of the Graphics Communications Union International Local 264. Ray leaves to cherish his memory his wife, Leona A. (Martin) of Chicopee; his two sons, Francis R. Provost and his wife Audrey of Belchertown and Kenneth C. Provost and his wife Joan of Chicopee; his two daughters, Maureen L. Munson and her husband Donald of Chicopee and Cynthia J. Feeley and her husband Michael of Chicopee; his daughter-in-law Carmina Provost of Chicopee; his brother, Robert A. Provost of Lehigh Acres, Fl; his sister Constance M. Lafleur of Chicopee; eleven grandchildren and nine great grandchildren; several nieces, nephews and extended family members. Beside his parents, Ray was also predeceased by his brother, Louis and his son, James R. Provost on March 27, 1999. There will be a Liturgy of Christian Burial on Wednesday, April 28, 2010 at 11:00 a.m. at Holy Name Church in Chicopee. Burial will follow the Liturgy in the Massachusetts Veterans� Memorial Cemetery in Agawam. A calling hour will precede the Liturgy from 9:00 a.m. to 10:00 a.m. at the Brunelle Funeral Home, 811 Chicopee St, Chicopee. In lieu of flowers, memorial contributions may be made in Ray�s memory, to either Hospice Lifecare, 113 Hampden St. Holyoke, MA, 01040 or to the American Cancer Society, 30 Speen St. Framingham, MA. 01701. You are using an outdated web browser that does not support this video. Your browser does not support this video format. You should be able to view it in Chrome, Safari or Internet Explorer. $(document).ready(function(){ if ( false === supports_h264_baseline_video() ) { $("#vdfmtnt").show(); $("#vidplyr1").hide(); } });

The family of Raymond A. Provost created this Life Tributes page to make it easy to share your memories.

Send flowers to the Provost family.