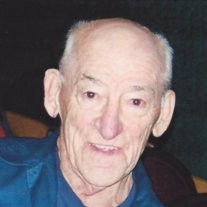 CHICOPEE- Raymond Depot, 91, Patriarch, passed away at Willimansett Center West on Thursday, September 19, 2013. He was a devoted father, grandfather, pepe�, uncle, friend to five generations of family. Ray was known in the community as �Pepe�� and �Ray the Mover� not only to his own family but to those who had the opportunity to befriend him over the years. Ray was born in Holyoke on October 24, 1921 a son of the late Raoul and Emma (Emmons) Depot and educated in Holyoke and Chicopee Schools. He enlisted in the US Army during WWII and served honorably until his discharge in 1946. In addition to his moving services Ray also worked at Worthington Pump/Atlas Copco for many years as well as at the Village Grain in Chicopee. He was a member of the Tigers A.C., Moose Lodge #1849, K of C Council #69 and the Elks Lodge # 1849. He enjoyed playing cards, fishing and the outdoors but most especially loved being able to be supportive of his family and friends. He is survived by his son, Glenn Depot and his wife Nancy of Chicopee; 3 daughters, Rhea Morrissette of Chicopee; Luana Depot of Holyoke; Wanita Estabrook and her husband Tom of Chicopee; a daughter in law, Brenda Bak of Chicopee; 3 sisters, Yvonne Theroux of Holyoke; Edna Mastorakis of Holyoke; Vivian Czupkiewicz of Belchertown; 19 grandchildren; 64 great grandchildren; 4 great great grandchildren as well as numerous nieces, nephews and cousins. In addition to his parents, Ray now joins his daughter, Tina Chapman; his son, Edward Depot; his brothers Henry & Phillip; his sisters Lillian, Jeanne, Rita, and Mae; and his former wife Evelyn (English) Depot in eternal rest and peace. Visiting hours will be held on Saturday, September 28, 2013 from 9-11AM at Brunelle Funeral Home, 811 Chicopee St., Chicopee, MA 01013. A funeral home service will be celebrated at 11AM on Saturday morning and be followed by the Rite of Committal and Burial in St. Rose de Lima Cemetery. If friends desire, in lieu of flowers memorial donations can be made to �Soldier On�, 421 N. Main St. Building #6, Leeds, MA 01053.

The family of Raymond W. Depot created this Life Tributes page to make it easy to share your memories.

Send flowers to the Depot family.