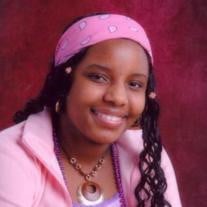 QUEEN ONONIUA 1993 -2010 CHICOPEE � Queen Ononiua, 17, beloved and beautiful child of Pedro and Marjorie (Ashline) Ononiua of Chicopee died unexpectedly December 18, 2010. Queen was born in Tanzania, Africa on September 6, 1993, celebrated her confirmation on December 17, 2007 and was educated in Tanzanian Schools and later continued her studies here in the United States in the Chicopee Public School System. A Sophmore at Chicopee High School, Queen was an A student and she was an avid reader which began as a young child in Africa with her grandmother, Eva Johnson and her grandfather Johnson Mosshi of Tanzania. Queen was a quite girl who was always well mannered and had great respect for her family and others. She came to the United States at age 14 and became a huge fan of U.S. Television, but still loved her books, especially The Twilight Series. It was not unlike Queen to help with painting around her home and preparing a meal for her family. Most recently she prepared her family home for the Christmas season and took great pride in her accomplishments. In addition to her paternal grandparents and her parents, Queen is survived by her two brothers, Benson Ononiua of Tanzania and her baby brother Quincy Ononiua of Chicopee. Queen also leaves behind many nieces, nephews and cousins both here and in Africa as well as her many new friends she met while living here in Chicopee. A funeral service will be held on Thursday, December 30, 2010 at 11AM in Bethany Assembly of God, 580 Main St., Agawam, MA 01001. The family will receive friends Thursday morning from 9:45 AM until 10:45 AM at Bethany Assembly of God. In honor of Queen�s love for the color PINK, we would ask those attending the funeral services to wear her favorite color in her honor if you so desire. The funeral services have been entrusted to the Brunelle Funeral Home, 811 Chicopee St., Chicopee, MA. In lieu of flowers, memorial donations in kind may be made to The Queen Ononiua Memorial Fund, c/o any local Bank of America Branch. Please visit www.brunellefuneralhome.com for directions, online condolences, Queen�s Life Tribute Video and to share with Ononiua family. You are using an outdated web browser that does not support this video. Your browser does not support this video format. You should be able to view it in Chrome, Safari or Internet Explorer. $(document).ready(function(){ if ( false === supports_h264_baseline_video() ) { $("#vdfmtnt").show(); $("#vidplyr1").hide(); } });

The family of Queen Ononiua created this Life Tributes page to make it easy to share your memories.

Send flowers to the Ononiua family.