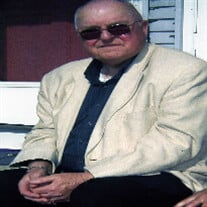 Pierce R. Canty 1934 � 2009 CHICOPEE � Pierce R. �Tiny� Canty, 75, died Friday, October 9, 2009 at his home, surrounded by his loving family. He was born in Stillwater, N.Y. on May 8, 1934 to the late Harold and Cora (Oakes) Canty. Pierce attended schools in New York and graduated from Mechanicsville High School in 1952. Mr. Canty first served our country in the United States Navy during the Korean War, where he earned the National Defense Service Medal and the Good Conduct Medal. Upon discharge from the Navy, he enlisted in the United States Air Force, where he gave an additional four years of service for our country. Pierce worked as a Truck Driver for T.A.T. Trucking before retiring after seventeen years of service. He had previously worked for the former Uniroyal in Chicopee. Mr. Canty was a former parishioner of St. Mary of the Assumption Church in Willimansett and was a longtime parishioner of the Assumption Church in Chicopee. He was a past Commander of the American Legion Post 353 in the Willimansett section of Chicopee and was a big supporter of the Springfield Falcons Hockey. He was a thirty year friend of Bill�s and was deemed the unofficial king of corny jokes. Pierce was predeceased by his loving wife, Virginia (Capasso) on January 20, 1995, after thirty-four years of marriage. He leaves to cherish his memory his three sons, Anthony J. Canty and his wife Cheryl of Chicopee, Matthew J. Canty and his wife Lynn and Mark E. Canty both of Westfield; his daughter, Danielle L. �Missy� Canty of Chicopee; his ten grandchildren, Bianca Leonard, Rosalie Descipio, Dominic, Cory, Shannon, Holden, Ian, Amanda, Pierce and Chloe Canty and his three great-grandchildren, Mitchell and Jackson Leonard and Zoey Metzner. Pierce will also be sadly missed by all of his coffee buddies, who served as a big support to him when his wife died. A funeral procession will form on Tuesday, October 13, 2009 at 8:45 a.m. at the Brunelle Funeral Home, 811 Chicopee St, Chicopee. There will be a Liturgy of Christian Burial at 10:00 a.m. at Assumption Church in Chicopee. Burial will be private and at the convenience of the family. Calling hours will be Monday, October 12, 2009 (TODAY) from 4:00 p.m. to 8:00 p.m. at the funeral home. In lieu of flowers, memorial contributions may be made, in Pierce�s memory, to either the Springfield Falcons Charity for Youth, P.O. Box 3190, Springfield, MA, 01101 or to Mercy Hospice, 1236 Main St, Holyoke, MA, 01040.

The family of Pierce R. Canty created this Life Tributes page to make it easy to share your memories.

Send flowers to the Canty family.