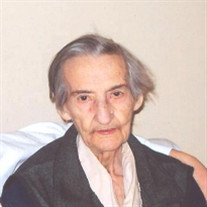 MARLENE F. NEE 1919 � 2008 CHICOPEE � Marlene F. �Molly� (Kazeroid) Nee, 89, a lifetime Chicopee resident, died on Wednesday, August 13 at the Willimansett Nursing Center East. She was born in East Windsor, Connecticut on February 18, 1919, a daughter of the late Louise and Matthew Kazeroid. She attended local schools and was previously employed at the former Taylor Bramley as a seamstress, and the Totsy Mfg. Co. of Holyoke. She was the wife of the late John R. Nee who died December 28, 1996. She is survived by two daughters, Marlene Gelineau and Rosemary Smith, both of Chicopee. She will be sadly missed by four grandchildren, Ruth Taylor of Washington, Mary Brunelle of Vermont, Ann Torres of Chicopee, and Kevin Smith of Chicopee, four great grandchildren, Shannon, Jeremy, Jason, and Tesha, four great-great grandchildren, Ashlynn, Hannah, Isaac, and Chloe. She also leaves several nieces and nephews and extended family members. She was predeceased by three brothers, Zigmond, Frank, and Max, and two sisters, Cecile Bushey, and Helen Fontaine, two half sisters, Hannah and Louise, and half brother, Adam. At the request of the family all services are private and burial will be at the convenience of the family. Memorial contributions may be directed to the Willimansett Nursing Center East Activity Fund, 11 St. Anthony St., Chicopee, MA 01013. The Brunelle Funeral home has been entrusted with the arrangements. Please visit www.brunellefuneralhome.com for an online guestbook. Brunelle Funeral Home 532-7711

The family of Marlene F. Nee created this Life Tributes page to make it easy to share your memories.

Send flowers to the F. family.