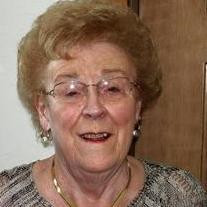 Marguerite M Poitras 1928 � 2011 Chicopee � Marguerite M. (Pare�) Poitras 82, of Chicopee was called safely home on Saturday, January 8, 2011. She was born in Holyoke, MA on October 21, 1928, the beloved daughter of the late Alfred and Rosalia (Chabot) Pare�. She was self-employed as a seamstress and taught evening school in South Hadley in dress and drapery making. She was a communicant of Saint Rose de Lima Church in Aldenville. She enjoyed traveling, playing cards at the Knights of Columbus and being surrounded by family and friends. She leaves her loving husband of 62 years, Clement Poitras. She leaves her loving children Susan Wiley and husband George of Saratoga Springs, NY, Richard and wife Donna of Oxford, MA, and Ronald and wife Candi of Auburn, NH. Her six cherished grandchildren, Emerson Wiley of Pittsburg, PA, Elliott Wiley of Nashville, TN, Matthew Poitras of Worcester, Ma, Christopher Poitras of Oxford, MA, Joshua and Rebekah Poitras of Auburn, NH. Her dear brother Jerome Pare� and wife Lucille of Chicopee. Her four dear sisters Theresa Boudreau and husband Ronald of Chicopee, Liliane Bilodeau and her husband Luc, Pauline Doyon and Gabrielle Montmeny, all of Saint Marie Beauce, Province of Quebec, Canada. Her dear brother-in-law, Jacques Goulet and wife Louisette of Quebec, Canada and many dear nephews and nieces. She was predeceased by her sisters, Doris Paul, Clarisse Bombardier, Cecile Goulet and brother Louis Pare�. Visiting hours will be held on Monday, January 10th from 4-7 PM at Brunelle Funeral Home, 811 Chicopee St., Chicopee, MA 01013. The funeral will be held on Tuesday January 11, 2011 at 8:15 AM from the funeral home and followed by a Liturgy of Christian Burial at 9:30 AM in St. Rose de Lima Church, 600 Grattan St. The Rite of Committal and Burial will be in St. Rose de Lima Cemetery all in Chicopee.

The family of Marguerite M. Poitras created this Life Tributes page to make it easy to share your memories.

Send flowers to the Poitras family.