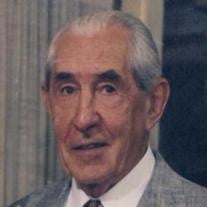 Marcel L. Guay 1918 � 2011 CHICOPEE � Marcel L. Guay, 92, died Monday, February 7, 2011 at the Geriatric Authority of Holyoke. He was born in Chicopee on June 22, 1918 to the late Napoleon and Evelina (Lemay) Guay. Marcel attended schools in Chicopee. He served our country in the United States Army during WWII. While in the military, Marcel earned the Good Conduct Medal, the WWII Victory Medal and the European African Middle Eastern Theater Campaign Ribbon. After his discharge from the Army, Marcel made his home in Chicopee. He retired from the Chicopee Fire Department as Captain, after thirty-two years of service. Marcel was a parishioner of the former Nativity of the Blessed Virgin Mary Church where he was a member of the League of the Sacred Heart. Marcel will be sadly missed by his loving wife of sixty-six years, Cecile V. (Riopel) of Chicopee; his brother, Roland Guay of CA; his sister, Claire Lussier of Holyoke; his nephew, Richard Hanson of MD; his niece, Carol Sabonis of FL; his two special cousins, Rose Morin of CT and Justine Wajda of Holyoke and several extended family members. Beside his parents, Marcel was also predeceased by his sister Pearl Hanson. There will be no calling hours. There will be a Liturgy of Christian Burial on Friday, February 11, 2011 at 10:30 a.m. at St. Anne�s Church, 30 College St. Chicopee. Family and friends are asked to meet at the church. Burial will follow the Liturgy in St. Rose de Lima Cemetery in Chicopee. In lieu of flowers, memorial contributions may be made, in Marcel�s memory, to St. Anne�s Church, c/o St. Anne�s Memorial Fund, 30 College St. Chicopee, MA 01020. Please visit www.brunellefuneralhome.com for directions or to share a story with Marcel�s family.

The family of Marcel Leopold Guay created this Life Tributes page to make it easy to share your memories.

Send flowers to the Guay family.