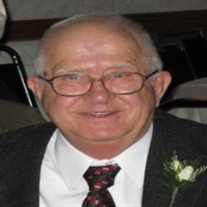 Lucien R. Betournay 1929-2009 CHICOPEE - Lucien R. "Curley" Betournay, 79, died at home on April 21, 2009. He was born in Chicopee on May 12, 1929, to the late Joseph and Alma (Granger) Betournay. He moved to Holyoke in 1953, and has lived in Chicopee since 1996. He attended Chicopee schools and proudly served in the U. S. Army during the Korean Conflict. He retired from B.F. Perkins in 1994, after working there as a machinist for 49 years. He served for many years as President of the local chapter of the AFL-CIO at Perkins. He also worked for many years at Interstate Tire Center in Holyoke. He was a communicant of Precious Blood Church for many years. He will be greatly missed by his wife of 55 years, Theresa J. (Angers) Betournay, and by his children, Donald and his wife Jackie of Chicopee, Norman and his fiancee Sheri Kania of Southwick, Alan and his wife Gina of Feeding Hills, and two daughters, Karen Betournay of Holyoke, and Joanne O�Rourke and her husband Bill of Holyoke, and his grandchildren Christine (Donahue) Ferguson and her husband Derek of Port Orchard, Washington, Caity Donahue of Holyoke, Samantha Betournay of Wichita, Kansas and Kimberlee Betournay of Agawam, Tyler Betournay of Chicopee, Aidan Betournay of Feeding Hills, and step grandchildren, Michael Watson and his daughter Mikeyla and Nathan, Shawn, Shannon, Erin and Brendan O�Rourke. He is also survived by his brothers Alfred and Henry (Barbara), and his sisters Blanche Cartier, Germaine Boudreau, Estelle Tetrault (Ernest) and Helen Labarre, his brothers in law Ralph Nadeau, Roger Angers and Norman Angers (Joyce), and his sister in law, Claire Betournay and many nieces and nephews. He was predeceased by his brothers Roland, Roger and Emile, and his sister Gertrude Nadeau. Curley enjoyed the Red Sox, and playing cribbage at the Chicopee Senior Center. For many years, he was an avid bowler, belonging to leagues in Holyoke and South Hadley. A funeral mass will be held at Blessed Sacrament Church on Northampton Street in Holyoke at 10:30am on Saturday, April 25, 2009. There are no calling hours. Burial will be at the Massachusetts Veterans� Memorial Cemetery at the convenience of the family. Brunelle Funeral Home of Chicopee is in charge of the arrangements. The family wishes to express their gratitude to Hospice Life Care of Holyoke, to Stavros Center for Independent Living, to Home Comfort Solutions, and to the oncology department at Riverbend Medical Associates in Chicopee for the care they provided. In lieu of flowers, the family requests that donations be made to Hospice Life Care of Holyoke, 113 Hampden St., Holyoke, MA 01040.

The family of Lucien R. Betournay created this Life Tributes page to make it easy to share your memories.

Send flowers to the Betournay family.