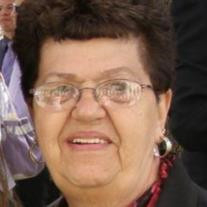 CHICOPEE- Lorette R. (Denoncourt) Trznadel, 75, passed away at her home surrounded by her loving family on Sunday, November 11, 2012. She was born in Chicopee on December 21, 1936 a daughter of the late Alpha and Lucienne (LaPierre) Denoncourt and educated in Chicopee Schools. Lorette and her husband owned the former Walters Market in Westfield for over 22 years and also worked at Stop& Shop in Holyoke for over 20 years retiring in 2000. She was a member of the Franco American Women�s Association in Chicopee, a member of the Ladies of the Moose Lodge and a longtime communicant of St. Anne�s Church in Fairview. She is survived by her husband of 57 years Edward F. Trznadel of Chicopee; her son, Michael Trznadel and his wife Eileen Collamore of Chicopee; her two daughters, Susan Popp and her husband Jeffrey of Chicopee; Mary Lou Quinn and her husband Scott of Ludlow; 2 brothers, Donald Denoncourt and Jean Paul Denoncourt both of Chicopee; one sister, Doris Winette of AZ. She will be missed by her nine grandchildren, Jessica Popp; Elizabeth Wood and her husband Eric; Andrew Trznadel and his wife Kristin; Adam Popp and his fianc� Shelley Denis; Steven Trznadel; Christine Trznadel and her fianc� Nate Colby; Josh Quinn; Brayden Quinn and Griffin Quinn; four great grandchildren, Gabby Wood; Gwen Trznadel; Emily Trznadel; Jefferson Wood and numerous nieces, nephews and extended family members. Lorette was also predeceased by two brothers and three sisters, Gerard and Robert Denoncourt, Marie Scalaro, Therese Courtney and Yvette Ouelette. Visiting hours will be held on Thursday, November 15, 2012 from 4-7 PM at Brunelle Funeral Home, 811 Chicopee St., Chicopee, MA 01013. The funeral will begin on Friday, November 16, 2012 at 8:30AM from the funeral home and followed by a Liturgy of Christian Burial at 10AM in St. Anne�s Church, 30 College St., Chicopee, MA 01020. The private burial will be held in St. Stanislaus Cemetery, Chicopee. If friends desire memorial donations can be made to St. Anne�s Church in Lorette�s name or to St. Jude�s Children Hospital, 501 St. Jude Place, Memphis, TN 38105-1905. Please visit www.brunellefuneralhome.com for more details.

CHICOPEE- Lorette R. (Denoncourt) Trznadel, 75, passed away at her home surrounded by her loving family on Sunday, November 11, 2012. She was born in Chicopee on December 21, 1936 a daughter of the late Alpha and Lucienne (LaPierre) Denoncourt... View Obituary & Service Information

The family of Lorrette Trznadel created this Life Tributes page to make it easy to share your memories.

Send flowers to the Trznadel family.