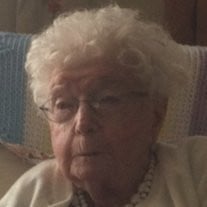 LORRAINE MARY BRINSON1908 - 2013CHICOPEE- Lorraine Mary (Ross) Brinson, 104, a longtime Chicopee resident died peacefully at home on Monday March 25, 2013 in the presence of her loving family and caregivers. She was born in Chicopee on November 20, 1908 a daughter of the late Edward T. and Sarah Jane (Godette) Ross. She attended Chicopee Schools and graduated from Chicopee High School. Furthering her education Lorraine graduated from Westfield State College in 1929 and began using her degree as a teacher in the Chicopee Public Schools at the Streiber Elementary School in Willimansett. She taught at Streiber School from its opening until her retirement in 1973 after educating the youth of the city for 39 dedicated years. She was a founding member of St. Mary�s Parish in Willimansett, chair of the fundraising womens group who held card parties, raffles and bazaars to raise funds for the new church. Lorraine was chair of the yearly Christmas Party that Fr. Donahue gave for the children, a charter member of St. Mary�s Guild where she served as secretary and later as publicity chair of the guild. She taught Catechism for many years and served at St. Anne Church in Fairview and also was a leader for a local Girl Scout Troop for many years. She and her husband, Karlton Brinson, who died in 1990, were very active in the square dance movement. They served in many capacities, including Presidents of the Chicopee Square Dance Club, as secretaries and also publicity directors. They were delegates together to the Eastern District Square and Round Dance Association. They served as chairs of the New England Square and Round Dance Convention held in Springfield in 1973, They organized groups of dancers to entertain at many local nursing homes, churches and senior events. Lorraine was a member of the Golden Squares and Merry Mixers Square Dance Clubs. She belonged to the Hampden County Retired Teachers Association and the MA Retired Teachers Association. She leaves a sister, Rosamond T. Tessier of Holyoke; a nephew, Gerald Tessier and his wife Kathy of Holyoke; a niece, Mary Curro and her husband Peter of Blandford; a niece, Jean Bates and her husband Charles of Westfield as well as 3 great nieces and 4 great nephews. Additionally her home caregivers, Jenn, Kelly, Denise, and Denise became like family members in her later years and gave her exceptional, loving care. Visiting hours will be held on Monday April 1, 2013 from 9AM-10:30AM at Brunelle Funeral Home, 811 Chicopee St., Chicopee, MA 01013 and be followed by a Liturgy of Christian Burial at 11AM in St. Anne Church, in the Fairview section of Chicopee. The Rite of Committal and Burial will be in St. Rose Cemetery, Granby Rd (Rt 33 & 202) in South Hadley, MA 01075. If friends desire memorial donations in Lorraine�s name may be made to St. Anne Church, 30 College St., Chicopee, MA 01020. Please visit www.brunellefuneralhome.com for more details.

LORRAINE MARY BRINSON1908 - 2013CHICOPEE- Lorraine Mary (Ross) Brinson, 104, a longtime Chicopee resident died peacefully at home on Monday March 25, 2013 in the presence of her loving family and caregivers. She was born in Chicopee on November... View Obituary & Service Information

The family of Lorraine M Brinson created this Life Tributes page to make it easy to share your memories.

Send flowers to the Brinson family.