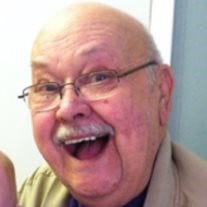 Chicopee- Karl �Cagey� Gawron, 75, passed away Sunday, April 10, 2016 at his home. He was a lifelong Chicopee resident born on November 12, 1940 a son of the Late Frank Gawron Sr. and Stella (Sawicki) Gawron. He was educated in the Chicopee Schools and graduated from Chicopee High School. Karl worked for over 40 years as a Class A machinist for Hamilton Standard and James River Graphics. He also served his community as a Chicopee alderman for several years. Karl loved hockey; he was an avid Patriot�s and Red Sox fan and especially enjoyed watching his children play sports. Karl enjoyed weekend breakfast trips to Al�s Diner with family, yearly family reunions, Hampton Beach trips, and playing pitch with friends. He was predeceased by his wife Sandra (Montgomery) Gawron on June 15, 2012. Karl is survived by his sons, Brian Gawron and his girlfriend Melissa of Chicopee, CW3 Karl Gawron and his wife Jessica of Savannah, GA; His adored grandsons, Burton Gawron and Jameson Gawron. He also leaves his five siblings, Francis S. Gawron Jr. and his wife Lucille of Beverly, MA; Thomas Gawron and his wife Irene of Chicopee, MA; Gregory Gawron and his wife Brenda of Westfield, MA; Barbara Kosciolek of Rochester, NY; and Elizabeth Gawron of Eastham, MA . He will be missed by his 16 nieces and nephews and 10 great nieces and nephews and by his uncle Frank Sawicki of Chicopee. Karl will also be greatly missed by his friends at the American Legion Post 438 and the Buffalo Club, Chicopee. He was also predeceased by his brothers Richard, Michael and Anthony Gawron. Life celebration services will be held Friday, April 15, 2016 from 4-7 PM with a 6:30 PM funeral home service at the Brunelle Funeral Home, 811 Chicopee St., Chicopee, MA 01013. Please visit www.brunellefuneralhome.com for more details.

The family of Karl B Gawron created this Life Tributes page to make it easy to share your memories.

Send flowers to the Gawron family.