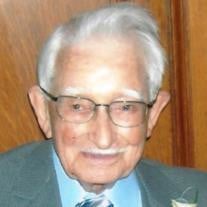 Joseph Piechowski1907-2015CHICOPEE- Joseph Piechowski, 107, passed away on April 10, 2015 in his home in Chicopee. Joseph was born in Holyoke on October 30, 1907, the son of the late Adam and Frances (Kida) Piechowski. He moved to Poland with his family shortly before turning five years old and returned to Holyoke at the age of 15. Joseph worked at Lyman Mills, Hotel Charles, and then owned a restaurant on Sumner Ave in Springfield. He worked for over 20 years at Gilbert and Barker in West Springfield as a machinist and sheet metal worker. Joseph retired at Spalding in Chicopee in January of 1970 at the age of 62. He married Viola Mish on October 13, 1940, and they spent 58 loving years together until her passing in 1999. Joseph had a very active social life in Chicopee and he a member of the Chicopee Knights of Columbus 15125, proudly the oldest member in the world. He was also a devoted catholic and member of St. Anthony of Padua Church. Joseph played the harmonica, enjoyed cooking, especially Polish golumpkis, and was a member of the Society of Polish American Culture. He and Viola often traveled and went square dancing. He is predeceased by his wife Viola Piechowski; and six sisters, Natalie, Clara, Estelle, Verna, Anita, and Pauline. Joseph is survived by his daughter, Barbara Wisniowski and her husband William of Chicopee; two granddaughters, Amy Hebert and her husband Tom of Chicopee, and Kathryn Rocha and her husband George of Attleboro, MA; two great grandchildren, Mia Rocha and Preston Hebert; one sister, Evelyn Auxford of Tewksbury, MA; and several nieces and nephews and grand nieces and nephews. Calling hours for Joseph will be Tuesday, April 14, 2015 from 4-7PM in the Brunelle Funeral Home, 811 Chicopee St, Chicopee. Services will be on Wednesday, April 15, 2015 at 9AM at the funeral home, followed by a Liturgy of Christian Burial at 10AM in St. Anthony of Padua, 56 St. Anthony St, Chicopee, and burial in St. Stanislaus Cemetery, Section Y, 800 Montgomery St in Chicopee.

Joseph Piechowski1907-2015CHICOPEE- Joseph Piechowski, 107, passed away on April 10, 2015 in his home in Chicopee. Joseph was born in Holyoke on October 30, 1907, the son of the late Adam and Frances (Kida) Piechowski. He moved to Poland with... View Obituary & Service Information

The family of Joseph Piechowski created this Life Tributes page to make it easy to share your memories.

Send flowers to the Piechowski family.