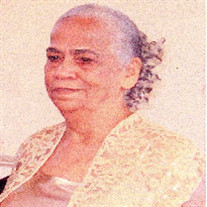 Josefa Silva 1926 � 2009 Chicopee � Mrs. Josefa (Soto) Silva, 82, passed away on Saturday, April 11 at the Baystate Medical Center. She was born in Humacao, Puerto Rico on September 26, 1926, a daughter of the late Felipe and Felicita (Agosto) Soto. She came to the United States in 1970 and was a former twenty seven year Holyoke resident and twelve year Chicopee resident. She was previously employed at the former Win-field Hat Company and Edaron in Holyoke. She is survived by her beloved husband of sixty four years, Tiburcio Silva-Ortiz, they were married on January 22, 1945 in Humacao, Puerto Rico. She also leaves nine children who will miss her deeply, six sons, Jesus of Puerto Rico, Reinaldo Sr., of Feeding Hills, Luis Sr., of Chicopee, Nelson of Puerto Rico, Felipe of Springfield, and Alvin of Holyoke, and three daughters, Myriam of West Springfield, Milta of Springfield, and Minerva of Puerto Rico. Other survivers include four brothers, Basilio, Carlos, and Liborio of Puerto Rico and Ramon of Ohio, and three sisters, Erotida, and Virginia of Puerto Rico, and Miguela of New Jersey. She will be sadly missed by twenty four grandchildren, twenty great grandchildren, and many nieces and nephews, and many friends in the community. She was predeceased by her twin brother, William and another brother, Carlos. Funeral services are Thursday, April 16 at 9:30am at the Iglesia Christiana Pentecostal Church, 96 Cabot St. in Holyoke. Burial will follow in Forestdale Cemetery. Calling hours will be held at the church on Wednesday, April 15 from 5 -9pm.

The family of Josefa Silva created this Life Tributes page to make it easy to share your memories.

Send flowers to the Silva family.