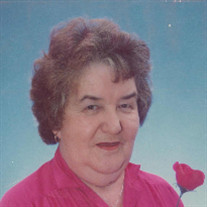 Jeannette R. Blais 1938 � 2009 Holyoke � Jeannette R. (Lambert) Blais, 71, died at home surrounded by her beloved family on Tuesday, May 12, 2009. She was born in Notres Dames Des Bois, PQ, Canada on February 25, 1938, a daughter of the late Onesime and Maria (DeLage) Lambert. She attended schools in Canada and came to the United States in 1963. She was a forty six year Holyoke resident and the former owner of Jeannette�s Place on Center St. in Holyoke. Jeannette�s family was her life. She loved to babysit, cook, crochet, and listen to French music. She was a communicant of Immaculate Conception Church. She was the wife of the late Claude Blais, who died June 27, 1997. She is survived by her son, Sylvain Blais of Holyoke, three daughters, Claudette E. Blais and her husband Rick of Holyoke, Jocelyne Delaney and her husband Wayne of Springfield, and Lise C. Provost and her husband Robert of Holyoke. She also leaves four brothers, Ernest of Palmer, Leon of South Hadley, and Normand and Gilles of Holyoke, five sisters, Germaine Halle, Alice Blais, Cecile Lambert, Alma Turgeon of Canada and Lucy Bourdeau of Holyoke. She will be sadly missed and always remembered by eleven grandchildren, Jaime, Jocelyne, Monica, Wayne, Toni, Eric, Natalie, Jennifer, Robert, Eladio, and Joey, fifteen great grandchildren, and many nieces and nephews. She was predeceased by two sons, Paul in 1962, Gilles in 1964 and her daughter, Fabienne Scribner in 2008. She was also predeceased by two brothers, Leo Lambert and Fernand Lambert. Funeral services are Monday, May 18 at 8:30am from the Brunelle Funeral Home, 811 Chicopee St in the Willimansett section of Chicopee, followed by a Liturgy of Christian Burial at 9:30am at Immaculate Conception Church, N. Summer St. in Holyoke. Burial will follow in St. Rose de Lima Cemetery in Chicopee. Calling hours at the funeral home are on Sunday, May 17 from 3 � 7pm. In lieu of flowers contributions in Jeannette�s memory may be directed to the Immaculate Conception Church Building Fund. Please visit www.brunellefuneralhome.com for directions and an online guestbook. Brunelle Funeral Home 532-7711

The family of Jeannette Rhea Blais created this Life Tributes page to make it easy to share your memories.

Send flowers to the Blais family.