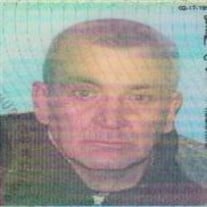 James A. Racine 1953-2009 CHICOPEE- James A. Racine, 56, a life long Chicopee resident, entered into eternal rest on Monday December 21, 2009 in Holyoke Medical Center. He was born on February 17, 1953 a son of Rene A. Racine of Chicopee, and the late Aline L. (Plasse) Racine. James attended Chicopee schools and was a former employee of the City of Chicopee. He attended mass at Immaculate Conception Church in Holyoke. Besides his father Rene, James is survived by three children, Jacob Racine of the U.S. Army, Talia Racine, and Tyler Racine, both of Chicopee; a brother, Ronald R. Racine and his wife Susan of Blandford; his former wife, Rose (Cloutier) Racine of Chicopee; and two nieces, Patricia A. Racine of East Otis, and Jamie L. Hollenbeck of Burlington, MA. Funeral services will be held on Wednesday, December 30th beginning at 10 a.m. from the Brunelle Funeral Home, 811 Chicopee St., Chicopee, with a Liturgy of Christian Burial at 11 a.m. in Immaculate Conception Church, 54 N. Summer St., Holyoke. Rites of Committal and burial will follow in St. Rose de Lima Cemetery, Olsen St., Chicopee. Visitation will precede the services on Wednesday at the funeral home from 9-10 a.m. For online guestbook or directions, please visit www.brunellefuneralhome.com.

The family of James A. Racine created this Life Tributes page to make it easy to share your memories.

Send flowers to the Racine family.