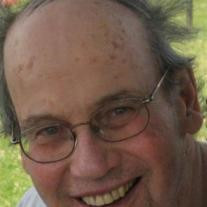 James Edward Dunleavy, Jr. 1939 -2010 James Edward Dunleavy, Jr. passed away suddenly on November 9th, just a few days short of his 71st birthday. A graduate of Classical High School in Springfield, MA in 1957 he went on to the University of Massachusetts at Amherst, graduating in 1961. He also earned a Masters degree in Chemical Engineering at the University of Rochester and spent much of his career working as a patent agent for Eastman Kodak in Rochester, NY and teaching at the Rochester Institute of Technology. He was a marathon runner, passionate about photography and his family and he enjoyed his grandchildren very much. Married to Helen Laberge, who predeceased him, Jim Dunleavy is survived by his 3 children: Kevin Dunleavy, Pamela Doran and Kimberly Ingram, and 3 grandchildren: Helena Ingram, Alida Dunleavy and Ryan Doran, as well as his brother Brian Dunleavy. His funeral mass will be held at St. Anthony of Padua, Chicopee, MA at 11:30 a.m. on Saturday November 13, 2010, with viewing at 9:30 a.m. at Brunelle Funeral Home, 811 Chicopee Street, Chicopee, MA, 01013. The Burial will be in St. Rose de Lima Cemetery, Chicopee. Flowers are to be sent to the funeral home. Donations may be made to St. Jude�s Children�s Hospital, P.O. Box 1000, Dept. 142, Memphis, TN 38148.

The family of James Edward Dunleavy created this Life Tributes page to make it easy to share your memories.

Send flowers to the Dunleavy family.