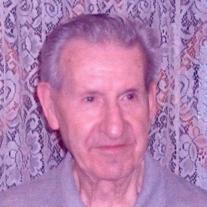 HENRY V. MORIN 1921 � 2011 CHICOPEE � Henry Victor Morin, 89, of Chicopee passed away in the comfort of his home and surrounded by his devoted wife and family on Wednesday, January 26, 2011. Henry was born in Poughkeepsie, NY on August 29, 1921 the son of the late Henry V. Morin and Lottie Roberts. He was educated at Holyoke High and Holyoke Trade Schools and entered the U.S. Navy in December of 1943. Henry served honorably with the navy and aboard the USS Natoma Bay and was released from active duty as an aviation machinist�s mate third class. He received the WWII Victory Medal, American Theatre Medal, Asiatic � Pacific Theatre Medal w/4 stars, Philippine Liberation Medal w/2 stars. Henry worked for many years as a tool and Die maker for Osley and Whitney in Westfield where he excelled in his trade. Henry also was a self employed toolmaker and created his own houseboat and several canoes. Henry married, Mary A. Brooksbank on June 29, 1946 and the couple recently celebrated 64 years together. Henry enjoyed traveling to Vermont, Maine and Cape Cod with his family and was always creating some device to make projects easier to accomplish. In addition to his devoted wife, Mary Morin of Chicopee, Henry is survived by his two sons, Bruce and his wife Susan of Southampton; Gene and his wife Sandra of Chicopee; his daughter, Vicki Morin of Lenexa, VA; four adored grandchildren, Heather and Michael Morin, Kori Morin and Tabitha Reilly and his three great grandchildren Gabriele and Kaleigh Coughlin and Savanna Rivera. Visiting hours will be held on Saturday from 3-5 PM at Brunelle Funeral Home, 811 Chicopee St., Chicopee, MA 01013 with a funeral ceremony being celebrated at 4:30 PM. In lieu of flowers, memorial donations can be made to the Holyoke Soldiers Home, 110 Cherry St., Holyoke, MA 01040 or to the Leukemia Society of America, MA Chptr, 180 Rustcraft Rd., Dedham, MA 02026. Please visit www.brunellefuneralhome.com to share memories, offer condolences, receive directions and view Henry�s Lifetime memorial webpage. You are using an outdated web browser that does not support this video. Your browser does not support this video format. You should be able to view it in Chrome, Safari or Internet Explorer. $(document).ready(function(){ if ( false === supports_h264_baseline_video() ) { $("#vdfmtnt").show(); $("#vidplyr1").hide(); } });

The family of Henry Victor Morin created this Life Tributes page to make it easy to share your memories.

Send flowers to the Morin family.