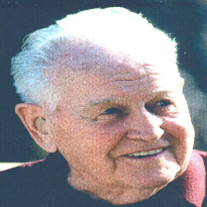 GORDON A. MACIVER 1917 � 2008 South Hadley � Gordon A. �Mac� / � George� MacIver, 91, a sixty year South Hadley resident, died at home on Monday, December 29, 2008. He was born in South Ryegate, Vermont on February 3, 1917, the son of the late John and Beatrice (Benzie) MacIver. He was a graduate of Newbury High School where he was a four letter sports star. He proudly served our country in the U.S. Army during WWII. He served in the South Pacific in the 43rd Infantry Division as a Master Sergeant in the motor pool and survived the sinking of the USS Coolidge. He retired as a supervisor from the former Uniroyal Tire Company after thirty three years of service, and was employed part time at Town House Gardens Realty Co. for twenty years. He was an avid Red Sox fan and enjoyed watching the UCONN girl�s basketball team. He enjoyed good times with family and friends, traveling to Florida, the Caribbean, New Orleans, and annual trips to Ogunquit, Maine, and the Mohegan Sun Casino. He was the husband of the late Gertrude �Nish� (Dietrich) MacIver who passed in 1982. He is survived by three children; his son, Donald MacIver and his wife Joan, two daughters; Jean O�Brien and her husband Mark, and Donna MacIver and Michel Reberkenny, and two granddaughters, Heather MacIver, equestrian trainer, and Andrea MacIver, DePaul law student, and his best buddies, Carol, Cindi, and Marley. The funeral procession will form on Saturday, January 3 at 9:30am at the Brunelle Funeral Home, 811 Chicopee Street, Chicopee, with a funeral home service at 10:30am. Burial will follow in Evergreen Cemetery in South Hadley. Calling hours at the funeral home are on Friday, January 2 from 4- 8pm. In lieu of flowers, contributions may be directed to the Jimmy Fund, Dana � Farber Cancer Institute, 10 Brookline Place West 6th Floor, Brookline, MA 02445-7226. Attn: Contribution Services.

The family of Gordon A. MacIver created this Life Tributes page to make it easy to share your memories.

Send flowers to the MacIver family.