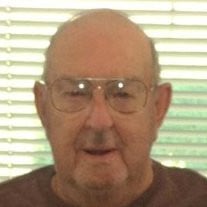 LUDLOW- Gerard Denette, 83, a longtime area resident formerly of Holy Cross Circle in Ludlow passed away on Thursday, Dec. 19, 2013 in Leesburg, FL where he has been residing with his beloved wife Claire (Peloquin) Denette for over 18 years. Gerard was born in Chicopee, April 23, 1930 the son of the late Alexander and Marie (Garreau) Denette. He was a graduate of Cathedral High School and later furthered his education in computer science in college. He worked for many years in the insurance industry before working as a salesman in the shoe industry, primarily in CT. He was a veteran of the Korean War and served proudly in the U.S. Air Force. Gerard was an Elk member and as an avid golfer was able to score a hole-in-one in Ludlow and in Florida. In addition to his loving wife of 56 years, Gerard is also survived by his two sons, Marc Denette of Kirtland, NM; David Denette of Ludlow; three daughters, Denise Bienieck of NH; Louise Hogue of OK; Marie Garbarino of Ludlow; 14 grandchildren and 2 great grandchildren. He will be missed by his niece, Diane Powers of Chicopee; his nephew, Kevin Powers of NY and his extended family and dear friends. Visiting hours will be held on Sunday, Dec. 22, 2013 from 1-4PM at Brunelle Funeral Home, 811 Chicopee St., Chicopee, MA 01013. The funeral will begin on Monday, Dec 23, 2013 at 8:30AM from the funeral home and be followed by a Liturgy of Christian Burial at 10AM by the Community of St. Elizabeth in St. John the Baptist Church, 191 Hubbard St., Ludlow, MA 01056. The Rite of Committal and Burial will be in St. Rose de Lima Cemetery, Olson St., Chicopee. Please visit www.brunellefuneralhome.com for more details.

LUDLOW- Gerard Denette, 83, a longtime area resident formerly of Holy Cross Circle in Ludlow passed away on Thursday, Dec. 19, 2013 in Leesburg, FL where he has been residing with his beloved wife Claire (Peloquin) Denette for over 18 years.... View Obituary & Service Information

The family of Gerard Denette created this Life Tributes page to make it easy to share your memories.

Send flowers to the Denette family.