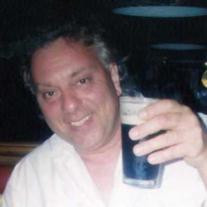 Chicopee � Gerald A. �Jerry� Frappier, 53, died suddenly at his home on Thursday, March 31, 2011. He was born in Springfield on April 17, 1957 to Therese J. (Pelletier) Frappier of Springfield and the late Gerard N. Frappier. Jerry graduated from Putnam High School in 1975 and attended Springfield Technical College. He worked for many years as a foreman in the construction industry with Welch Corp Construction and Liquori Excavating. He was currently employed at the Republican newspaper where he has been a devoted employee since 1998. Jerry�s outgoing personality enabled him to make friends with everyone he met. His firm handshake and broad smile were his calling cards. Fiercely competitive, he would welcome any debate on who is the best hockey team. We all knew that he wore his Montreal Canadians colors proudly. The foundation for his life was based on devotion and a strong loyalty to both his family and friends. He wore many hats in his short life, but he treasured the roles of caring son, protective brother and faithful friend. In addition to this mother, Jerry leaves to cherish his memory, his �kid� sister, Mary Ann G. Syriac and her husband Kenneth of Southampton; his cousin Denise Skiba and her husband Scott of Pembroke Pines, FL; his best friend and �brother�, Mike �Hungarian� Rodriguez of Chicopee and his band of brothers, Jose Berrios, Junior, Herman Serrano, Robert and Roland Valesquez. He will also be sadly missed by the many friends and acquaintances whose lives he touched. A gathering to remember Jerry will take place on Thursday, April 7 from 4:00 p.m. to 6:00 p.m. with a funeral home service being conducted at 6:00 p.m. at the Brunelle Funeral Home, 811 Chicopee St. Chicopee. Burial will be at a later date in St. Michael�s Cemetery in Springfield. In lieu of flowers memorial contributions may be made in Jerry�s memory, to the Annual Catholic Appeal, P.O. Box 1730, Springfield, MA 01102-1730. Please visit www.brunellefuneralhome.com for directions or to share a story with Jerry�s family.

The family of Gerald A. Frappier created this Life Tributes page to make it easy to share your memories.

Send flowers to the Frappier family.