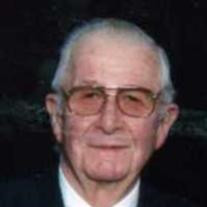 CHICOPEE � George J. Sander Jr., 78, died on Veteran�s Day, November 11, 2010 at his home with his loving daughters by his side. He was born in Bridgeport, CT on November 24, 1931 to the late George Sr. and Esther (Rau) Sander. George graduated from Milford High School in Milford, CT. He proudly served our country in the United States Coast Guard during the Korean War. While in the military, George earned the National Defense Service Medal, the Good Conduct Medal and the Coast Guard Honorable Discharge Button. Upon discharge from the military, George worked as an Engineer for Daniel O�Connell and Sons Construction in Holyoke, before retiring after forty years of service. In his retirement years, George worked part-time at the Holyoke YMCA as a Security Officer. He was an active member of the Faith United Methodist Church in Chicopee. George leaves to cherish his memory, his two daughters, Ruth E. Michalski and her husband Michael of South Hadley and Karen M. Sander-Buscemi and her husband Andrew of South Hadley; his grandson, Jacob A. Michalski of South Hadley and his two beautiful birds, Harry and Hazel. George was predeceased by his daughter Kathryn Sander in 1960; his brother, Reginald Sander and his sister, Madelyn Marx. There will be a Service of Remembrance on Tuesday, November 16 at 11:00 a.m. at the Faith United Methodist Church, 191 Montcalm St. Chicopee. Burial will be private and at the convenience of the family. A calling hour will precede the Service from 9:00 a.m. to 10:00 a.m. at the Brunelle Funeral Home 811 Chicopee St. Chicopee. The family would also like to extend a personal invitation to join them in a Celebration of George�s Life on Saturday, November 20, 2010 at 11:00 a.m. at the Tavern on the Hill Restaurant Rt. 141 in Holyoke (next to the Log Cabin Restaurant). George�s family would also like to extend a special Thank You to Holyoke VNA and Hospice and to the O�Connell Professional Nursing Service for the wonderful care and support that they provided to George and his family. In lieu of flowers, memorial contributions may be directed in George�s memory to either the Salvation Army, 271 Appleton St. Holyoke, MA, 01040 or to the Faith United Methodist Church 191 Montcalm St. Chicopee, MA 01020 You are using an outdated web browser that does not support this video. Your browser does not support this video format. You should be able to view it in Chrome, Safari or Internet Explorer. $(document).ready(function(){ if ( false === supports_h264_baseline_video() ) { $("#vdfmtnt").show(); $("#vidplyr1").hide(); } });

The family of Mr George J. Sander created this Life Tributes page to make it easy to share your memories.

Send flowers to the Sander family.