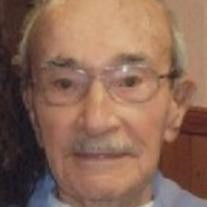 GRANBY- George Albert Russell, Jr., 99, passed away on Thursday October 11, 2012 at Holyoke Medical Center. George was born in Springfield, MA on September 1, 1913 a son of George Sr. and Victoria Page Russell. He was a 1934 graduate of Commerce High School and later enlisted in the U.S. Navy during WWII serving his country with honor. He was a longtime Chicopee resident and loved raising his family with his beloved wife of 67 years, Jeannette (Denis) who passed away in March 2009. He was a field underwriter for numerous insurance companies, including Monarch Ins. Co. Following his retirement, George was a courier for Bassett Printing and most recently was a crossing guard for the City of Chicopee retiring in 1989. George was a longtime communicant of Nativity Church where he belonged to the League of Sacred Heart, a cantor and soloist and was the secretary of the Nativity Athletic Association and coached in the pee-wee league. He was an officer of the American Legion Post # 353 and his generosity and compassion will be greatly missed. He was an avid Red Sox fan and took great pride in hearing about his families activities and accomplishments. He is survived by his son, Pete Russell and his wife Susan of Epping, NH; two daughters, Cyndi Desilets and her husband Normand of Chicopee; Mary Russell of Chicopee; eight cherished grandchildren and their spouses, Paul and Elaine Lafleur of Granby; Keith and Karen Lafleur of Belchertown; Kim Lafleur of Palmer; Michelle and Mark Santangelo of Westfield; Lynne Desilets of East Longmeadow; Laurie Ann Hebert of Belchertown; Jeffrey Desilets of Chicopee; Andrew Russell of Epping, NH; eight adored great grandchildren, Stephanie Desilets; Michael Latour; Amanda and Emily Lafleur; Jacob and Julia Santangelo and Abigail and Ethan Lafleur. George will also be missed by his extended family and friends, especially those at Phins Hill. He leaves a sister, Claire James of Yarmouthport, MA and was predeceased by a brother and three sisters. Visiting hours will be held on Sunday, October 14, 2012 from 1-4 PM at Brunelle Funeral Home, 811 Chicopee St., Chicopee, MA 01013. George�s funeral will begin on Monday at 8:30 AM from the funeral home and followed by a Liturgy of Christian Burial at 10 AM in St. Theresa�s Church, 9 E. Parkview Dr., South Hadley. The burial with military honor will be in Notre Dame Cemetery, South Hadley. Memorial donations in George�s name may be made to St. Jude�s Children�s Hospital, 501 St. Jude Place, Memphis, TN 38105-1905. Please visit www.brunellefuneralhome.com for more details.

GRANBY- George Albert Russell, Jr., 99, passed away on Thursday October 11, 2012 at Holyoke Medical Center. George was born in Springfield, MA on September 1, 1913 a son of George Sr. and Victoria Page Russell. He was a 1934 graduate of Commerce... View Obituary & Service Information

The family of George Albert Russell created this Life Tributes page to make it easy to share your memories.

Send flowers to the Russell family.