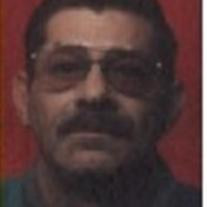 HOLYOKE- George Crochetiere, 68, entered eternal peace on Tuesday, March 13, 2012 at the Holyoke Medical Center surrounded by his family. George was born in Westfield on December 7, 1943 the son of the late Charles and Cordelia (Boucher) Crochetiere. He was educated in Holyoke and worked at Dinn Brother�s Trophy and retired after completing over 12 years of service. George was a devoted Parishioner of Immaculate Conception Parish in Holyoke. He enjoyed playing pool and was a fan of Elvis. George was also an avid Red Sox and Patriots fan. He was a member of the Elk�s Lodge #902, Franco Club and was a member of Holyoke Auxiliary Police. He will be deeply missed by his wife and caregiver of 45 years Marie (Antaya) Crochetiere; his four daughters; Christine Mayhew of Springfield,VT; Charlene Rackliffe of Holyoke, MA; Cheryl Hanson of Holyoke, MA; Holly Crochetiere of Holyoke, MA; his three brothers, Raymond Crochetiere of Chicopee; Arthur Crochetiere of NH; Francis Crochetiere. of Chicopee; a sister; Judy Yoekle of MD as well as his twelve adored grandchildren; six great-grandchildren and extended family members. George was also predeceased by his loving son, Jason Crochetiere and three brothers; Charles Jr., Alden and Roger Crochetiere. Visiting hours for George will be held on Friday, March 16, 2012 from 4-7 PM at Brunelle Funeral Home, 811 Chicopee St., Chicopee, MA 01013. The funeral will begin on Saturday, March 17, 2012 at 8:45 AM from Brunelle funeral home and followed by A Liturgy of Christian Burial at 10AM in Immaculate Conception Church, 54 North Summer St., Holyoke. The Rite of Committal will be in Notre Dame Cemetery, Lyman St., South Hadley. Please visit www.brunellefuneralhome.com to share condolences, pictures, stories and view George�s personal webpage tribute.

HOLYOKE- George Crochetiere, 68, entered eternal peace on Tuesday, March 13, 2012 at the Holyoke Medical Center surrounded by his family. George was born in Westfield on December 7, 1943 the son of the late Charles and Cordelia (Boucher) Crochetiere.... View Obituary & Service Information

The family of George Crochetiere created this Life Tributes page to make it easy to share your memories.

Send flowers to the Crochetiere family.