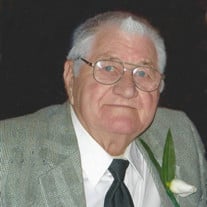 FREDERICK G. KLEIN, JR 1934 � 2017 CHICOPEE- Frederick �Skip� Klein, 83, passed away on Saturday, July 22, 2017 at the Holyoke Soldiers Home. He was a proud and decorated Korean War Veteran having served honorably in the United States Marine Corps. He was awarded the Korean Service Medal with two stars as well as the United Nations Service and the National Defense Service Medals. Most recently he worked at Solar Trucking and Hampden Beef as a deliveryman/trucker for over 40 years. He was awarded an honorary diploma during �Operation Recognition� in May 2002 from The City of Chicopee. He is survived by his lifelong love, Ina (Taylor) Klein whom he married in February 1954. Frederick also leaves behind his six children, Frederick Klein and his wife Kim of Pennsylvania; Dwayne Klein and his wife Linda of Chicopee; Ronald Klein and his wife Sharon of Florida; Stephen Klein and his significant Deb of Chicopee; Patty Roy and her husband Daniel of Chicopee and Kelly Boudin of Chicopee. He will be missed by his 13 grandchildren, 17 great grandchildren and many nieces, nephews and cousins. Skip also leaves his two brothers, Daniel Klein and his wife Marilyn of Chicopee and Thomas Klein and his significant Marge of Agawam. Visiting hours will be held on Wednesday, July 26, 2017 from 4-7PM at Brunelle Funeral Home, 811 Chicopee St., Chicopee, MA 01013. A funeral home service will be held on Thursday, July 27, 2017 at 10AM. The burial with military honor will be held Friday, July 28, 2017 at 10AM at the Massachusetts Veterans� Memorial Cemetery, 1390 Main St. Agawam. A special thank you from Frederick�s family goes out to Hospice and the 3rd Flr North Comfort Care Unit staff at the Soldiers Home. In lieu of flowers, memorial donations in Fredericks� name may be made to the Holyoke Soldiers Home, 110 Cherry St., Holyoke, MA 01040. Please visit www.brunellefuneralhome.com for more details. $(document).ready(function(){ var ifr = $("#05p00354652x35e0"); ifr.data("ratio", ifr.attr("height")/ifr.attr("width") ); ifr.removeAttr("width").removeAttr("height"); // Resize the iframes when the window is resized $(window).resize(function(){ var width = ifr.parent().width(); ifr.width(width).height(width * ifr.data("ratio")); }).resize(); });

The family of Frederick G Klein Jr created this Life Tributes page to make it easy to share your memories.

Send flowers to the Klein family.