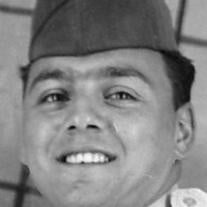 Frederick G. Abood 1931 � 2010 HOLYOKE � Mr. Frederick G. Abood, 79, died Saturday, December 4, 2010 at the Soldiers� Home in Holyoke. He was born in Brooklyn, N.Y. on April 10, 1931 to the late Albert and Sadie (Fishfish) Abood. Frederick was a career veteran, serving our country in the United States Air Force. While in the military, he attained the rank of Tech Sergeant and earned many awards including; the National Defense Service Medal, the Air Force Longevity Service Award with four oak-leaf clusters, the Air Force Good Conduct Medal with four oak-leaf clusters, the Air Force Outstanding Unit Award with one oak-leaf cluster, the Small Arms Expert Marksmanship Ribbon, the Air Force Commendation Medal and the Bronze Star. Upon his discharge, Mr. Abood made his home in Chicopee and worked for the United States Postal Service for twenty years. He was a former member of the VFW and DAV. Frederick was also a member of the United States Air Force Sergeant�s Association. Mr. Abood was predeceased by his wife, Barbara Ann R. (Barszcz), in 1993, after thirty-five years of marriage. He leaves to cherish his memory his two sons, Ronald S. Abood of Chicopee and Mitchell D. Abood of Belchertown; his two daughters, Monica J. Millis of East Hartford, CT and Christine A. Johnson of Salem, N.Y.; his brother, Sammy Abood of PA; his three grandchildren, Matthew, Jonathan and Nicole and several nieces, nephews and many extended family members. There will be a Graveside Service on Wednesday, December 8, 2010 at 1:00 p.m. at St. Patrick�s Cemetery in Chicopee. Family and friends are asked to meet at the cemetery. There are no calling hours. In lieu of flowers, memorial contributions may be made in Frederick�s memory, to the Alzheimer�s Association, 264 Cottage St, Springfield, MA 01104.

The family of Frederick G. Abood created this Life Tributes page to make it easy to share your memories.

Send flowers to the Abood family.