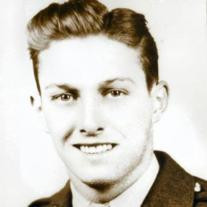 Francis Wenninger 1923 � 2010 CHICOPEE � Francis R. Wenninger, 87, passed away Thursday, August 12, 2010 surrounded by his loved ones. He was born on February 8, 1923 to the late Anna Gasching and Frank Wenninger. Francis was predeceased by his stepmother, Florence and his brother, Joseph. Francis served his country honorably in the United States Army Medical Corps, 160th General Hospital Division, during WWII. While in the military, he earned the European African Middle Eastern Theater Campaign Ribbon, the Good Conduct Medal and the WWII Victory Medal. In 1947, Francis married the love of his life, Joan Selina Fowden. Francis spent most of his life with family and friends in Chicopee, where he worked for Savage Arms as a machinist for over forty years. He was a devote Roman Catholic and was a parishioner of the former St. Mary�s Church in Chicopee. He is survived by his loving wife of 62 years, Joan (Fowden); his son, Raymond; his grandchildren, David and Heather; his sister, Dorothy; his brother, Louis; his nieces, Anne, Carol, Susan and Linda and his nephews, Michael and Steven. He will be greatly missed by all who knew and loved him. There will be a Liturgy of Christian Burial on Friday, August 20 at 11:30 a.m. at St. Rose de Lima Church in Chicopee. Family and friends are asked to meet at the church. Burial will follow the Liturgy in the Massachusetts Veterans Memorial Cemetery. Calling hours will be Wednesday, August 18 from 6:00 p.m. to 9:00 p.m. at the Brunelle Funeral Home, 811 Chicopee St. Chicopee, MA. Memorial contributions may be made in Francis�s memory to the Shriners Hospitals for Children, 516 Carew St. Springfield, MA. 01104-2396.

The family of Francis R. Wenninger created this Life Tributes page to make it easy to share your memories.

Send flowers to the Wenninger family.