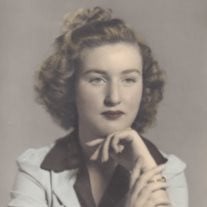 Frances Furtek passed away with peace and grace on September 12, 2016, with her family members and a close family friend by her side. She was 90 years old. Frances was the daughter of Luther and Nellie Saunders and the sister of L.B. Saunders, Jr. and Janie Saunders Woodard. She was born in the state that she was always to cherish, North Carolina. It was in her hometown of Cary, North Carolina, that she met her future husband of 57 years, Walter Furtek of Chicopee, Massachusetts, who was stationed there during WWII. Frances often loved to share the story of how she met her husband. Walter, who was walking down West Chatham Street back to base from maneuvers with Army Air Corps buddies, Walt Lis and John Yeskie, stopped to ask for a drink of water of her little sister, Janie, who was outside playing by the sidewalk of their front yard. Janie went into the house to ask her mother for the water, which her mother gladly arranged on a tray, complete with pitcher and glasses, to honor these servicemen�s request. She then asked her oldest daughter, Frances, who had just returned from church, to bring this tray of water out to the servicemen. As her future husband would later relate, when he first and unexpectedly saw Frances, not little Janie, appear with this tray of water, he immediately was taken by her beauty. They sat on the front porch and talked all afternoon, which was a feat for the usually shy Walter. They later wrote to each other, and Walter visited Frances often. Each of Walter�s two Army Air Corps buddies would become in time Godfather for Frances and Walter�s oldest daughters, Carolyn and Barbara. During their engagement, Frances worked at the Pentagon as a secretary. Married in 1943, Frances lived with her family in N.C. while her husband continued his wartime service. In 1944, their first daughter, Carolyn, was born in Raleigh, North Carolina. After the war and Walter�s honorable discharge, he brought his small family North, back to his hometown. They settled down, bought a house, and had two more daughters, Barbara and Christine. Walter worked for Uniroyal until his retirement, and Frances was a homemaker as well as working at F.W. Sickles. Walter and Frances loved to travel, each summer driving to North Carolina to see family. In pre-interstate days, the trip was 18 hours long, but they made those trips memorable, the girls tucked in the backseat with pillows and their mini-libraries (no car sickness in this family!) and stopping along the way to visit sights in Washington, D.C., picnic at roadside scenic areas, and let their dog Scamp scamper about during these travelling breaks. Once in North Carolina, it was often large family meals of Eastern Carolina barbecue, collard greens, black-eyed peas, hushpuppies, and country ham smoked in Frances� uncle�s smokehouse and after-meal rocking chair marathons on the wide front porch, sharing what was new in the family, waving to neighbors (and strangers) in passing cars, and, as night fell, watching lightning bugs light up the lawn. Back in Massachusetts, Frances� daughters grew up, and each graduated from college, as education was very important to both Frances and her husband: Carolyn in Nursing, becoming Director of Nurses, Barbara in English, becoming a teacher, and Chris in Art History (of course, working in Public Health, instead). Frances was very proud of her daughters. They were the lights of her life. Frances was an accomplished seamstress, making nearly all of her daughters� clothes, including Easter outfits and winter coats. Her decorative flags, with her signature heart logo, which her daughter Carolyn commissioned her to make for friends in the Air Force, fellow nurses, and family, still fly today in all parts of the country. She was also a great cook, making many differing cuisines � her husband�s favorite �horse collar� (kielbasa), homey comfort food, as well as being more adventurous, taking classes in sushi making, pre-1980! Frances also was a Red Sox fan, enjoyed playing pinochle with friends, and LOVED �The Andy Griffith Show.� Her creative and inspiring work as Girl Scout Troop Leader in Western MA earned her an award at the State House in Boston. She also was an active participant of the Holyoke Medical Center�s Stroke Therapy Group for 18 years, where she made many friends. Frances became a grandmother, her daughter Carolyn marrying the best son-in-law for whom a mother could ever ask, Alan Gatesman. and they had two wonderful sons, Michael and Brian. More family to love! Because Al was in the Air Force, stationed in Delaware, Maine, and Upstate New York, more travel ensued for Frances and Walter. In 1993, Frances was saddened by the loss of her eldest daughter, Carolyn, followed in 2003 by her son-in-law, Al, both to cancer, and in 1999, her beloved husband, Walter. Now, Mike and his wife Jennifer and Brian and his wife Stephanie have families of their own. Frances was great-grandmother to Mark, his wife, Becca, Kelly, Christopher, Andrew, Sarah and Merrin. Her �grands and greats� are all special and were especially loved. In Frances� later years she was lovingly cared for by her two remaining daughters in her home until her passing. At home, she continued to listen to and LOVE Andy Griffith�s music, do her Wordsearch, and loved getting and giving hugs and kisses from family and friends. She enjoyed her daughters� cooking as they both must have inherited their skill from her. Frances� life will be celebrated starting on Sunday, September 18 with a visitation/wake from 3PM to 6PM at Brunelle�s Funeral Home, 811 Chicopee St., Chicopee, MA. Her funeral will begin on Monday at 8:45AM from Brunelle�s Funeral Home to be followed by a 10:00AM funeral service at Faith Methodist Church, 191 Montcalm St., Chicopee, MA with burial afterwards at Saint Stanislaus Cemetery in Chicopee. Memorial donations in Frances� name may be made to the Library Fund/Elms College, 291 Springfield St., Chicopee, MA 01013 or to a charity of one�s choice.

Frances Furtek passed away with peace and grace on September 12, 2016, with her family members and a close family friend by her side. She was 90 years old. Frances was the daughter of Luther and Nellie Saunders and the sister of L.B. Saunders,... View Obituary & Service Information

The family of Frances Furtek created this Life Tributes page to make it easy to share your memories.

Frances Furtek passed away with peace and grace on September...

Send flowers to the Furtek family.