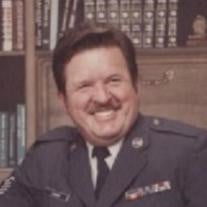 Chicopee- Eugene �Gene� F. Landy, Jr., 81, passed away on Sunday, May 20, 2012 at the Holyoke Soldiers Home. Gene was born in Buffalo, NY on August 7, 1930 educated in Connecticut schools and was a 1948 graduate of Suffield High School. Gene was a true American and patriot, enlisting in the U.S. Air Force during the Korean War. Gene served as an aircraft mechanic and after his honorable discharge he began a 32 year career with Pratt & Whitney as an aircraft engineer. Gene also served faithfully in the Civil Air Patrol for over 20 years and attained the rank of Lieutenant Colonel. He was a member of the Knights of Columbus Council # 4044, Disabled American Veterans� and the Moose Lodge in Southington, CT. He is survived by his wife of 28 years, Iris (Dwyer) Landry of Chicopee; his son, Michael Landry and his wife Paula of Barrington, RI; his daughter, Ellen Urciola and her husband Rick of Newhall, CA; his step children: Joseph Presz; David Presz; Terrence Presz; Christopher Presz; James Presz and Timothy Presz all of Chicopee; his brother, Frank Miller of Canada. Gene also leaves ten loving grandchildren, Samantha Landry, Sara Landry, Sabrina Landry, Nicole Nellis, Amanda Presz, Mellissa Presz, Eric Presz, Connor Presz, Brendan Presz, Chase Presz and many caring extended family members and friends. Visiting hours for Gene will be held on Wednesday, May 23, 2012 from 4-7 PM at Brunelle Funeral Home, 811 Chicopee St., Chicopee, MA 01013. The funeral will begin on Thursday, May 24, 2012 at 9:45AM from the funeral home and followed by a Liturgy of Christian Burial at 11 AM in St. Anthony of Padua Parish, 56 St. Anthony St., Chicopee, MA 01013. The Burial and Rite of Committal will be in St. Rose de Lima Cemetery, Olson St., Chicopee. If friends desire, memorial donations can be made to Westover D.A.V. # 11, 9 Darwin Dr., Westfield, MA 01085. Please visit www.brunellefuneralhome.com for more details and to view Gene�s life tribute video. You are using an outdated web browser that does not support this video. Your browser does not support this video format. You should be able to view it in Chrome, Safari or Internet Explorer. $(document).ready(function(){ if ( false === supports_h264_baseline_video() ) { $("#vdfmtnt").show(); $("#vidplyr1").hide(); } });

The family of Eugene Francis Landry created this Life Tributes page to make it easy to share your memories.

Send flowers to the Landry family.