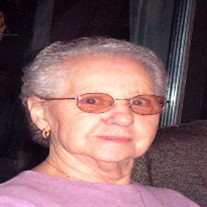 Eliane J. Blais 1924 � 2009 Chicopee � Eliane J. (Turgeon) Blais, 85, died at home surrounded by her beloved family on Saturday, June 6, 2009. She was born in Notre Dame Des Bois, PQ, Canada on June 3, 1924, a daughter of the late Joseph and Amanda (Carrier) Turgeon. She attended school in Canada where she was a homemaker. She came to the United States in 1968 and was a 41 year Chicopee resident. She was previously employed at the former Service Rubber Co. of Chicopee for many years. She was the wife of the late Lionel E. Blais who died on January 6, 2004. She is survived by her son, Gaetan and his wife Darlene of Wilbraham. She also leaves three brothers, Ernest Turgeon of Sherbrooke, PQ, Canada, Leonard Turgeon of Granby, and Eliniere Turgeon of Holyoke, four sisters, Simone Blais of Sherbrooke, PQ, Canada, Aline Turgeon of Chicopee, Helene Turgeon of Notre Dame Des Bois, PQ, Canada, and Rhea Turgeon of St. Jerome, PQ, Canada. She will be sadly missed by her two grandsons, Jeremy and Martin Blais, and many nieces and nephews. Funeral services are on Tuesday, June 9 at 9am from the Brunelle Funeral Home, 811 Chicopee St. followed by a Liturgy of Christian Burial at 10am at Nativity of the Blessed Virgin Mary Church. Burial will be in St. Rose de Lima Cemetery. Calling hours at the funeral home are Monday, June 8 from 2 -4 and 6 � 8pm. In lieu of flowers memorial contributions may be directed to Westmass Eldercare, 4 Valley Mill Rd. Holyoke, MA 01040 or Hospice Life Care, 113 Hampden St., Holyoke, MA 01040 .

The family of Eliane J. Blais created this Life Tributes page to make it easy to share your memories.

Send flowers to the Blais family.